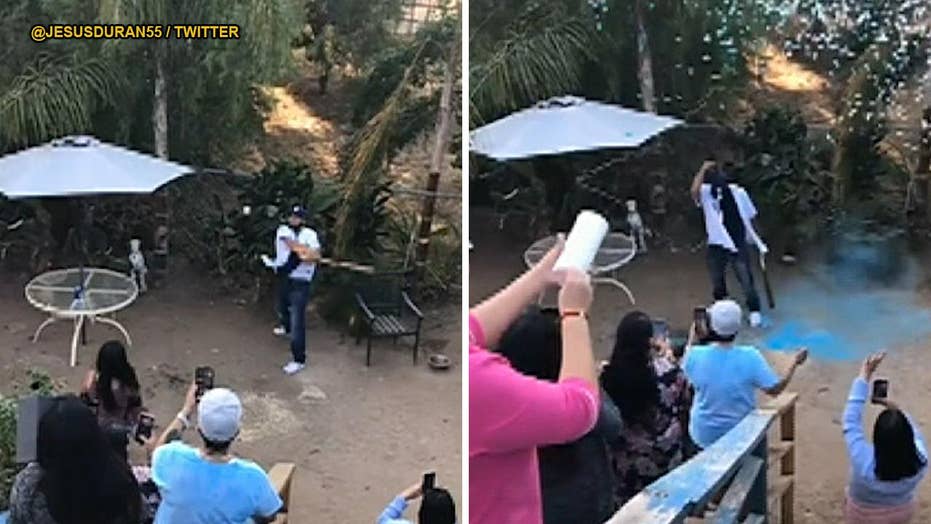 Hilarious footage of a gender-reveal-gone-wrong was shared to Twitter, showing the dad-to-be swinging and missing five times. Eventually he becomes frustrated enough to take matters into his own hands, throwing the ball into the air himself, and missing again. This time, however, the ball exploded into a cloud of blue powder, revealing that the couple is expecting a boy.

This guy probably doesn’t have a future ballplayer on his hands.

Gender-reveal celebrations, which have been gaining in popularity over the last few years, often involve the expecting parents trying to come up with new and unique ways of revealing their baby’s gender to friends and family. And one family in California did just that — although not in way they hoped.

Hilarious footage of the gender-reveal-gone-wrong was shared to Twitter by Jesus Duran, who claimed to be the cousin-in-law of the dad-to-be. In it, Duran's female cousin throws a ball filled with colored powder at her husband, who is waiting to swing at it with a baseball bat.

Unfortunately for the dad-to-be, he didn’t hit a home run.

After five swings-and-misses, the seemingly frustrated father-to-be took matters into his own hands and threw the ball into the air himself… and then missed again.

This time, however, the ball exploded into a cloud of blue powder, revealing that the couple is expecting a boy.

"It was supposed to be just a normal gender reveal until they said they're doing a baseball gender reveal but none of them played baseball or softball, haha," Duran told My 9 NJ. "The family's reaction was great because everyone was giving him a hard time because it was so funny."

While the gender reveal may not have gone entirely according to plan, at least there wasn’t any controversy. Unfortunately, the same couldn't be said of a different gender reveal in September, after an expecting couple using a hippo to help with their ceremony at a zoo in Texas.

A clip of Jonathan and Bridgette Joseph tossing a watermelon – filled with blue Jell-O – into the hippopotamus’ mouth caused a mouthful of controversy on social media, with critics taking issue with the food dye the animal was made to consume, and another calling it the "worst" gender reveal.

The zoo later pointed out that the animal involved in the reveal was not harmed in the process.

The husband in that reveal, too, was also slammed for saying “thank God” after it was revealed the couple is expecting a boy.