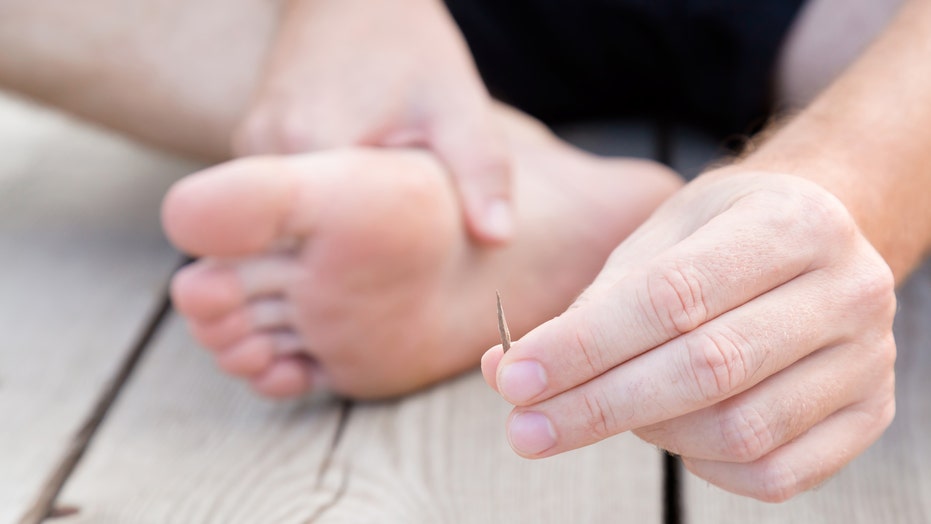 It can be a freeing feeling to shuck off your shoes and walk outside barefoot during the warm spring and hot summer until the deck sticks your exposed foot with a tiny, pointy gift: a splinter.

But it's so tiny or so deeply stuck in the skin that you can't get it out. So, what would happen if you just left it in?

It's best not to wait and see, as leaving a splinter in the body can provide a passageway for infection, said Ashley Jones, a certified nurse practitioner at The Ohio State University Wexner Medical Center. [Do Rusty Nails Really Give You Tetanus?]

The "skin is a physical barrier that prevents infections," Jones told Live Science. So a splinter that breaks that skin "makes it easier for bacteria outside of the skin to actually get under the skin." That bacteria may already be on the splinter, holding on for a free ride into the bloodstream, or it may make its way in through the open gates after the incursion.

One such infection is caused by the tetanus bacteria (clostridium tetani), which, if it makes its way into the body of a person who is not vaccinated or up to date on their tetanus boosters, can release toxins that harm the nervous system.

Because of the risk of infection, "I would generally recommend that you not leave a splinter in place," Jones said. If you can't easily grab it with tweezers and by applying a slow, steady pressure, "I would recommend just seeking health care," she said.

FROZEN BREAKFAST BURRITOS RECALLED AFTER COMPLAINTS OF ROCKS IN PRODUCT

Dr. Jefry Biehler, chair of pediatrics at Nicklaus Children's Hospital in Miami, echoed this recommendation. If removing a deeply embedded splinter at home may result in a lot of bleeding, then head to a health care center, where professionals can remove the splinter using clean, sterile instruments, he said.

If the splinter isn't removed, the body probably won't absorb the invader or break it down. Rather, the body will likely try to push the splinter out, Biehler said. The splinter may cause an inflammatory reaction, which could mean swelling and redness in that area. What's more, pockets of pus may form to help expel the splinter.

If the inflammatory response continues for a number of days or weeks, the area can sometimes develop a somewhat permanent bump or what's called a "granuloma," Jones added. This is kind of a protective bubble of immune cells that surround the foreign object the body wasn't able to oust.

Sometimes the body can naturally expel a splinter from the skin without causing an inflammatory response, Biehler said. Other times, the splinter may stay in the skin forever.

Biehler noted that one of his nurse friends has had an inch-long thorn in her hand for the past 40 years. "You can feel it, she can move it … [but] it doesn't cause her any pain," he said. "She's been fine for 40 years." The splinter doesn't carry as big of a risk of infection as when she first got it, because the skin closed on top of it, he added.

"It is a fine line between what needs to be seen [by a doctor], what needs to be removed and what can be left alone," Biehler said. But in general, splinters you get around the house or those that come from plant materials, such as wood, "usually need to come out, because the body reacts to it."

In any case, foreign bodies lodged in the skin — especially in children and the elderly, who may be more prone to infections — should be evaluated by a health care professional, he said.

Why Do Our Fingernails Keep Growing Until the Day We Die?

Do You Really Need to Buy Aluminum-Free Deodorant?