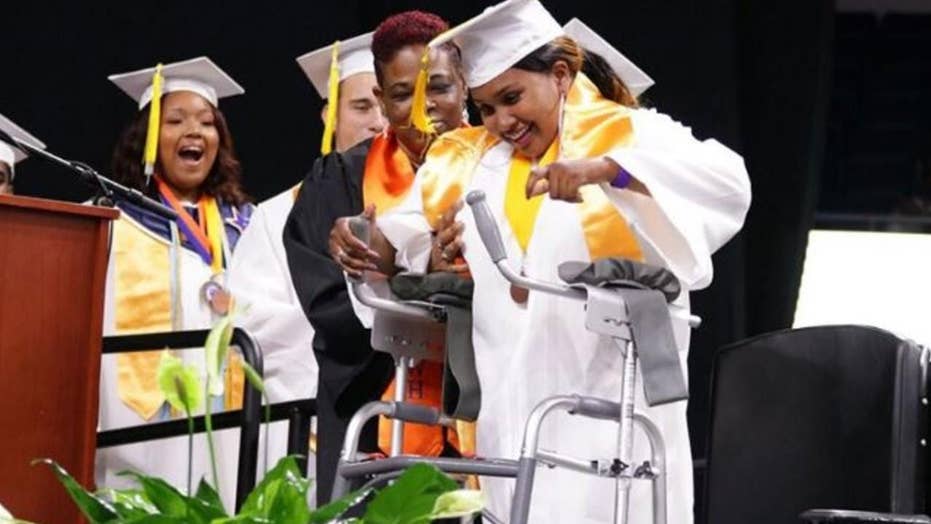 A Virginia teen who spent five months in a coma following a 2017 car crash walked across the stage with her classmates last week to receive her high school diploma.

A Virginia teen who spent five months in a coma following a 2017 car crash walked across the stage with her classmates last week to receive her high school diploma. Nada Edwards, who set a goal to graduate from Woodrow Wilson High School on time, was pictured beaming as she used the help of a walker to get across the stage.

“That’s always been my number one goal,” Edwards told WTKR. “Walk across the stage for graduation.”

It’s a huge accomplishment for Edwards, who reportedly was not expected to wake from the coma.

At one point, doctors reportedly told Edwards' mother they were unsure if she would ever wake from the coma. (Portsmouth Public Schools)

“They told me they didn’t think she would wake up and if she did, she would be a vegetable and as a mom, you don’t accept that,” Alice Edwards, the teen’s mom, told WTKR.

Edwards had been in the car with her young brother when another vehicle struck them, according to the news outlet. Edwards’ brother phoned 911 and is credited with helping to save her life.

After five months of uncertainty, Edwards said her daughter opened her eyes, “God just flipped a switch and she was back.”

Edwards said her daughter’s teachers would come to the house to help her with schoolwork during her recovery, and that she is set to attend college in the fall.

Edwards' mother said her daughter's teachers would come to the house and help her with coursework during her recovery. (Portsmouth Public Schools)

“I’m still speechless,” Alice Edwards posted in part, on Facebook. “Yesterday was nothing short of amazing. I’ve been trying to find the words to express how I feel and I just can’t. It’s a feeling you have [the] experience to know.”

“The closer to graduation we were the more nervous I became,” she wrote. “To know her one wish for this year was something I couldn’t control couldn’t just buy or do burned me to the core. But to see her work relentlessly in therapy every single day for that moment made me proud and angry at the same time. Why can’t I just fix this and why God why does she have to work so hard for something that should be hers to do proudly easily?? And clearly God told me everyone has make sacrifices for me and I chose you to make the ultimate one. You were chosen. And the next morning Roman 8:18 was my devotion. And it hit me that Nada understands it more than me. With all she’s had to endure she still smiles and pushes forward so she has to know her glory is coming. She was chosen to give her life to be a light for me for us to show the world GOD IS REAL! And I know the work the lord started the day he rose her back up he will complete we just have endure until he does the same way I had to while waiting for him to wake her up like promised me he would that night.”

She went on to thank family and friends for helping to support Edwards through her recovery and determination to graduate.