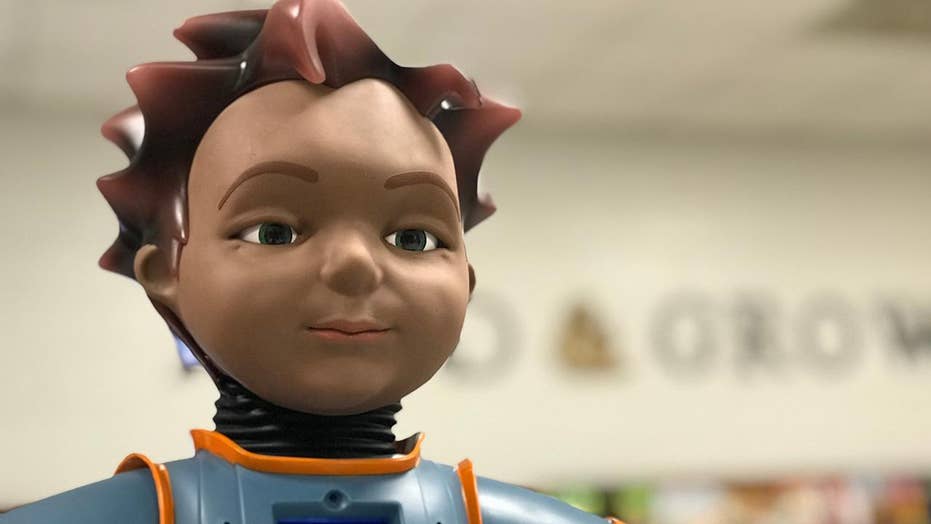 Schools across the U.S. are using robots as a part of a new curriculum. In South Carolina, teachers use Milo, a boy robot that can dance, walk and use human-like expressions to teach kids with autism social and behavioral skills

While it has been dubbed in some alternative medicine circles as “Miracle Mineral Solution” or “MMS,” there are growing concerns among medical and legal professionals over parents feeding a bleach solution to their children under the guise of it “curing autism” — but in some cases, the alarm isn’t yet enough for law enforcement to take swift action.

A case recently brought to light centered on Laurel Austin of Lenexa, Kan., who came under fire this month after feeding her adult son, who has autism, the controversial bleach product and posting it for thousands of online followers to see, according to NBC. After the boy's father, Bradley, who is estranged from Austin, found out early this year about the substance being used, he turned to local law enforcement — but to date has not been able to halt the use of questionable “treatments” on his son.

AS US POPULATION AGES, MORE ELDERS ARE SUBJECT TO PHYSICAL, SEXUAL AND FINANCIAL ABUSE

“On January 4, 2019, we opened a criminal investigation into this matter based upon a complaint made by Bradley Austin," the Lenexa Police Department told Fox News in a statement. "This case was assigned to a detective on January 5. As you realize, the vast majority of the substance of the investigation is protected from disclosure by HIPAA and/or the Kansas Open Records Act, preventing further elaboration on the details,” it continued.

“However, the Lenexa Police Department is confident that a thorough investigation was conducted and that the decision to close the case based upon insufficient evidence to establish a criminal offense was the appropriate decision based upon the information available.”

Laurel Austin did not respond to requests for further comment, but has previously defended her actions and stated that the media is being used as a “shameful tool with incorrect information by an absentee father.”

Parents have been investigated across the U.S. for feeding their children a concoction of water and bleach to cure autism. (iStock)

Nonetheless, the MMS cocktail peddled by many more than just Austin has medical professionals reeling. The chlorine dioxide is a blend of sodium chloride, water and an acid activator, and first came on the alternate scene over 20 years ago brought by key Scientology figures.

The use of MMS is believed to have caused at least two deaths and scores of health injuries. Moreover, MMS-endorsing videos have long had a place across social media, with troves of videos adorning YouTube and touting how the solution can treat an array of ailments from malaria and HIV to cancer, acne, hepatitis and autism.

The Google-owned streaming platform has come under fire in recent months for allowing the perilous content to fester and even climb to top ranks in search algorithms, but a spokesperson told Fox News this week that “YouTube does not allow content that encourages dangerous activities with a risk of physical harm, and we work to quickly remove flagged videos that violate these policies.”

Dr. Dominic Gaziano, a general internal medicine physician and Director at Body & Mind Medical Center in Chicago, concurred that such “misguided information” is hard to shake after it takes root across the Internet and that, if not scrubbed, they run the risk of spreading and harming others.

Yet the argument for whether Internet platforms do have an obligation to remove dubious content in regard to health advice is murky.

“The Internet provides instant information at a level that was once unthinkable. With all its dangers, we must allow all the voices and viewpoints to be heard,” said Troy Slaten, a California-based defense attorney. “But if those who care for children, or adults who are incapable of making their own decisions, place them in danger then, of course, the authorities should step in.”

Meanwhile, the Food and Drug Administration (FDA) has warned that MMS “can cause serious harm to health” and acknowledged that in recent times, they had received a number of reports of people consuming the composite and subsequently suffering from potentially fatal low blood pressure as a result of dehydration, as well as extreme vomiting and nausea.

The Association for Science in Autism Treatment (ASAT) has also lambasted the use of what it calls “bleach therapy,” surmising that there are no controlled research studies on the treatment and that the chlorine “is toxic, poses a significant risk of harm and is potentially lethal, particularly for young children.”

“It is completely reckless and reprehensible that people are pushing ‘miracle cures’ for autism that are in fact not only completely ineffective but can cause serious harm,” contended Dr. Dena Grayson, a Florida-based medical doctor and biotechnology consultant. “A single dose of chlorine dioxide can cause irritation to the gastrointestinal and respiratory systems, as well as to the eyes. Long-term exposure in children may impair brain growth, which can have devastating, lifelong consequences.”

The Chemical Safety Facts website notes that chlorine dioxide has a number of uses, including to disinfect drinking water, sterilize medical and laboratory equipment; in the electronics industry, it is used to clean circuit boards and as a bleach in the paper and textile manufacturing processes.

Yet the likes of Kerri Rivera, one of the online leaders in plugging MMS, remain undeterred by the negative media limelight and words of warning from physicians across the country.

The homeopathic practitioner referred Fox News to postings on her website in which she stated that “parents are not poisoning their children” through MMS and that “chlorine dioxide is not in any way chemically related to household bleach and that is used in dental practice, as a purifier of public water supplies, and in sprays to decontaminate produce, meats and fish.”

“A private investigator with military intelligence experience and a career at a three-letter agency volunteered his services to put together a web page documenting the work of reporters who have been the most active in spreading misinformation to the public about what chlorine dioxide is — and isn’t,” Rivera also wrote on her website. “It appears that some of these reporters have been actively coordinating with abusive Internet trolls who have been caught harassing families of children with autism.”

But for some mothers whose children also have autism, the whole concept of using such a chemical cure is beyond fathomable.

“The Internet is full of many unsubstantiated claims. Parents need to carefully weed through the many pseudoscientists and try to find information that is actually helpful,” added Dana Commandatore, the founder of ReThinkingAustism.com. “Drinking bleach as a cure is not only completely unsubstantiated, it is child abuse.”