Medical Mysteries and Marvels: At just nine weeks' gestation Vanellope Hope Wilkins was diagnosed with a rare heart defect known as thoracic ectopia cordis, a malformation where her heart forms outside her chest. Vanellope was given a 10 percent chance of living after birth. After multiple surgeries, doctors were able to re-inserted Vanellope's heart inside her chest. After 14 months Vanellope got to go home and is adjusting well.

The UK baby had thoracic ectopia cordis, which meant her heart had formed outside her chest. Vanellope was given a 10 percent chance of living after birth.

Still parents, Naomi and Dean Wilkins, decided to try surgery, knowing full well they could lose their baby. Vanellope was born prematurely at Glenfield Hospital in Leicester and was swept into surgery to repair her defects. 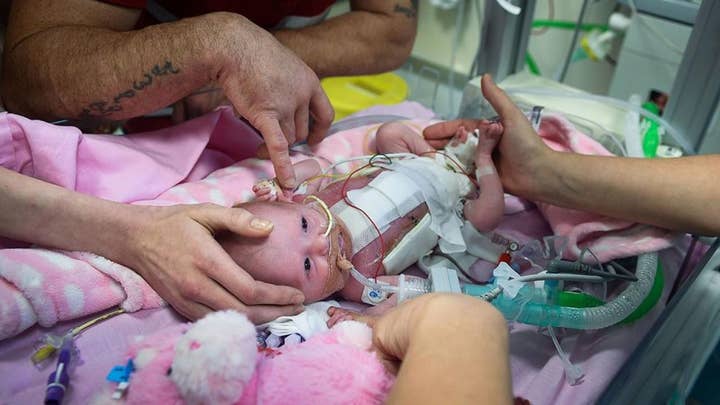 According to The Sun, the parents had prepared for the worst, bringing a cocoon to the hospital in case their little girl died.

But after multiple three-hour-long surgeries, the doctors managed to insert a breathing tube, then re-inserted Vanellope’s heart inside her chest. Doctors covered the heart with a mesh for protection and finally, skin grafted from her arm, reports The Sun.

After 14 months of surgeries and close hospital care, little Vanellope left for home in February. Naomi Wilkins says her daughter was born with her arm protecting her heart.

Though wary of Vanellope’s fragile condition, Wilkins told The Sun that her family was adjusting well to life at home.

According to Texas Children’s Hospital, only 8 out of 1 million babies are born with ectopia cordis. Of those, 90 percent are either stillborn or die within the first 3 days.

The hospital has seen its own little miracle, discharging a 3-month-old baby named Audrina with the condition in 2013. Both cases required dozens of doctors and medical staff during surgeries and afterward to give the babies a fighting chance.

Although ectopia cordis doesn’t have a clear cause, experts say the condition is unlikely genetic. According to Texas Children’s Hospital, cases like Vanellope’s and Audrina’s give doctors hope for helping more babies born with the condition.