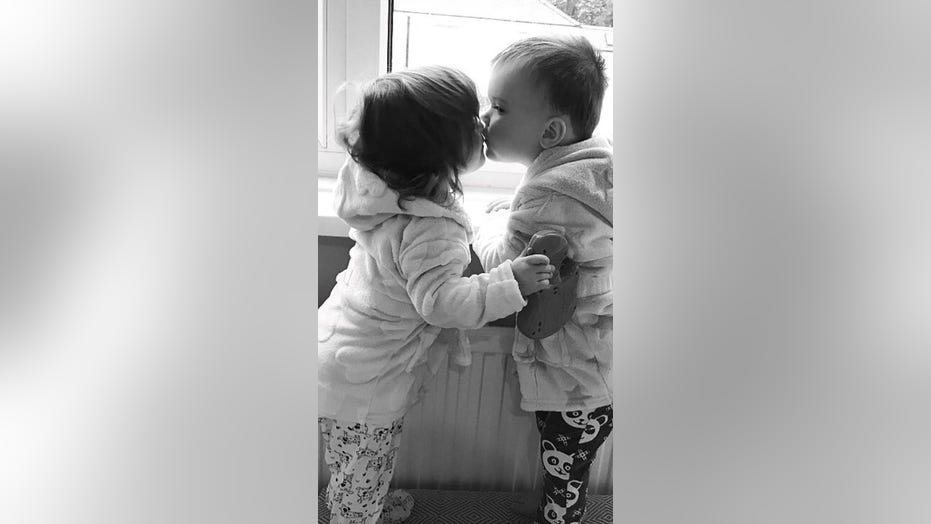 The devoted mom of 3-year-old twins gave a moving speech of her fear as her son, who was diagnosed with a rare form of leukemia just after Christmas Day, is separated from his sister for the first time to receive life-saving treatment.

Self-employed couple Holly and Tom Parkin, of Plymouth, Devon, England, thought little of it when their boy, Fox, came down with tonsillitis in October 2019. However, his symptoms returned after antibiotics and his temperature began to spike.

Then, on December 25,  Holly Parkin, 35, noticed a worrying rash coating the back of his legs and whisked him to nearby Derriford Hospital, where blood tests revealed that night that he had Acute Promyelocytic Leukaemia (APL) - a rare cancer affecting just 200 people annually in the U.K., according to the charity Bloodwise.

Now, Fox faces months of grueling treatment – which includes having intravenous arsenic, more familiar as a poison, but which is also a naturally occurring element and can be highly effective when used medically - and is being parted from his beloved twin, Winter, for the first time.

“As you would expect, we were utterly heartbroken by the diagnosis," Holly Parkin, a hairdresser, said. “I know the alternative is worse, but it is brutal to have to cope with the fact that my child is having arsenic put into his body. No child should go through that. One comfort through all of this has been people's overwhelming generosity.

"I don’t know what we’d have done without the charity CLIC Sargent. They have given us a room to stay in near the hospital and free taxis. Not having to worry about these kinds of things on top of everything else has been incredibly helpful. Before this, I never even knew the charity existed, but I am so grateful for their support.”

The twins have been separated for the first time in their young lives after Fox was diagnosed with a rare form of leukemia.  (PA Real Life)

Until now, Fox and Winter, who turned three on 3 January, were happy, healthy twins who always bounced back quickly from childhood bugs, according to Holly.

But when Fox developed tonsillitis  – an inflammation of the tonsils, which can feel like a bad cold or flu – everything changed and, in December, it returned with a vengeance.

“I thought maybe Fox was going to be one of those poor kids who gets tonsillitis all the time,” she said. “How I wish that was true.”

Going back to the doctor, Fox was given a fresh prescription of antibiotics – but this time, they did not work, even when the dosage was upped.

Then, when his temperature kept spiking, Parkin called 111 – the non-emergency number for the NHS – and was given an out-of-hours appointment.

“That was on a Friday night,” she said. “They told us to stick with it over the weekend and come back if he wasn’t any better. By that point, Fox hadn’t eaten properly in almost a week, [and] so had lost lots of weight, too.”

When Monday arrived, thankfully, Fox appeared to have turned a corner, seeming a little more himself.

And a few days later, on Christmas Day, he woke up seeming perfectly happy and excited to open his presents with his sister. But soon things took a turn for the worse.

“Winter and Fox got scooters for Christmas and we said we’d all go to the park so they could play with them,” Parkin said. “Fox was getting changed out of his pajamas when I noticed a rash on his legs that wasn’t blanching. Straight away, my brain said, ‘meningitis,’ as I knew a rash could be a telltale sign.”

Phoning 111 again, she arranged to go to Derriford Hospital, where doctors did not think he had meningitis but agreed that he was very unwell.

“They ran blood tests, but said it would be a few hours before the results were back," she recalled. “So, we went home to start our Christmas dinner and pass the time – but within an hour, my phone was ringing with the doctors telling us to come back to the hospital. With how quickly they’d called, I knew it wasn’t going to be good.”

Back at Derriford, medics explained that Fox had an abnormally low blood cell count and would require a transfusion.

“At that point, we still needed the full blood results before we could work out exactly what was going on,” she said. “So, Tom popped home to get some things, as it looked as if one of us would stay overnight with Fox. After he left, a consultant came over to ask where he was, saying they would wait until he was back to talk to us both. I knew then it wasn’t good news, but when Tom returned and we were led into this side room with tissues and sofas, my heart sank.”

Doctors told the devoted parents that Fox had leukemia, a cancer of the white blood cells.

After a night on the high dependency unit, he was transferred to Bristol Royal Hospital for Children for a bone marrow biopsy, to determine exactly what form of the disease he had.

“Up until that moment we held on to the hope that doctors could be wrong, that Fox may not have what they said he did,” Parkin said. “But the results showed that he had a form of leukemia called APL. It’s very rare. The hospital told us they hadn’t seen a case themselves in years.”

According to cancer charity Bloodwise, APL can affect any age group, but is less common in children under 10, and treatment, which begins immediately, is usually based on a combination of chemotherapy and other drugs.

Fox began with a drug called all-trans retinoic acid (ATRA), given orally as a capsule twice a day, before starting a course of arsenic trioxide - an effective treatment for APL, which works by speeding up the death of leukemic cells and encouraging normal blood cells to develop properly.

“He had it intravenously for two hours a day, five days in a row, then he had a break,” Parkin said. “Now, he’s having it twice a week for seven weeks.”

Currently, Fox is in what is known as the induction phase of treatment, which aims to destroy as many cancerous cells as possible.

This will last for seven more weeks, after which he will move on to the consolidation phase when treatment is made stronger to stop the disease coming back.

After being struck down by a number of infections, the little boy's immune system is virtually non-existent, meaning his parents must be very careful about who they allow to visit him in hospital - which, heartbreakingly, means he has been parted from Winter for the first time in his life.

“She came up for their birthday on 3 January, but we want to keep things as normal as possible for her. She knows her brother is in the big hospital to make him better, but I’m not sure she understands exactly what that means,” Parkin said. “They’d never spent a night apart before this, so it’s been really hard.”

Because the Parkins are both self-employed, taking time off work to care for Fox could also pose some financial difficulties so, to help, they set up a GoFundMe page, and were blown away when donations began to flood in. Setting a humble $650 target, the page has now raised more than $7,800.

“People have been so incredibly kind,” Holly Parkin said. “We’ve been told that the first eight weeks are crucial, so we really need to be with Fox. Even if we weren’t at hospital, we wouldn’t be in the emotional headspace to work. People’s generosity has really helped take the pressure off. It’ll mean things like all the travel to and from Bristol, which is about two hours each way, won’t be as stressful.”

She has now chosen to speak out about their experience to thank the kind friends and strangers who have donated, as well as the charities Bloodwise and CLIC Sargent for providing invaluable support.

“Bloodwise do all the research and science, so without them, we wouldn’t have the knowledge and the treatments we need to help Fox," she said. “And CLIC Sargent have been absolutely amazing. We’re still in the phase where it doesn’t feel real, but having so much support around us is such a comfort.”