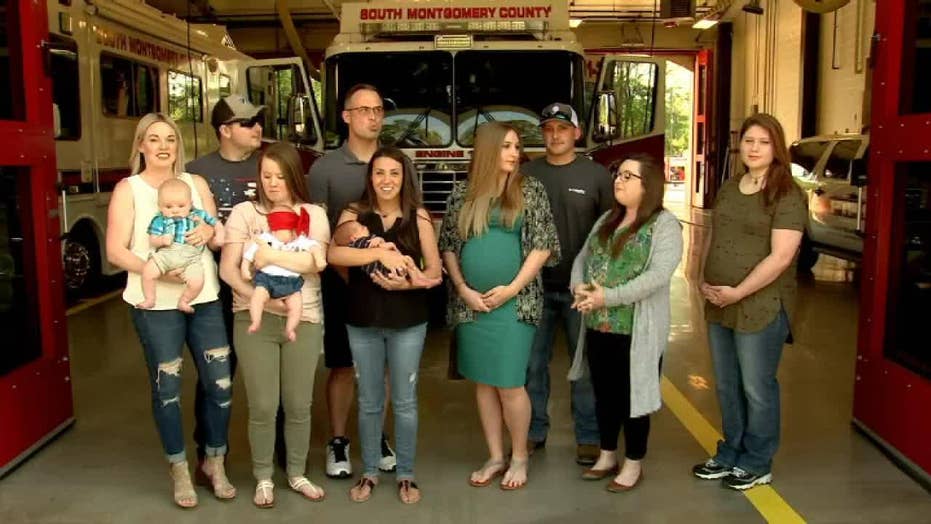 Some of the 20 babies expected to be born by September have already made their debut.

A firehouse in Houston has its hands full over the next few months with 20 of its firefighters getting ready to or already welcoming new babies. The babies, six of which have already made their debut, are all expected to arrive by September.

“We joke sometimes when they’re like, ‘Oh it’s something in the water,’” Stephani Stan, who welcomed her first child with her firefighter husband in December, told Fox 26. “It’s not in the water. It’s definitely in the tequila.”

The 20 dads and dads-to-be make up 20 percent of Montgomery Fire Department’s 100-member staff, with the couples telling Fox 26 that it was a domino effect of sorts when it came to pregnancy announcements.

“One person announced it, then the next person was just like ‘Oh, us too!” Erin Sharpe, who is due in May, told Fox 26.

While the men plan to pitch in and help cover each other’s shifts, the wives said it’s nice to have so many friends experiencing pregnancy at the same time. For one couple, their pregnancy is the miracle they’ve been waiting for.

“We’re due July 21 and we’ve actually been trying for four years,” Andrea Kent, wife of firefighter Riley Kent, told Fox 26. “I’m a cancer survivor so this is sort of a miracle baby for us.”

Photos of multiple baby bumps in the workplace have gone viral recently, with nine nurses on Maine Medical Center’s labor and delivery unit being the most recently featured in the news. Those nurses are expecting their babies to be born between April and July.

“It’s really nice coming to work and seeing people who are just as pregnant and watching their bellies pop and just talking about these experiences that we are going through together,” nurse Amanda Spear told WMTV.