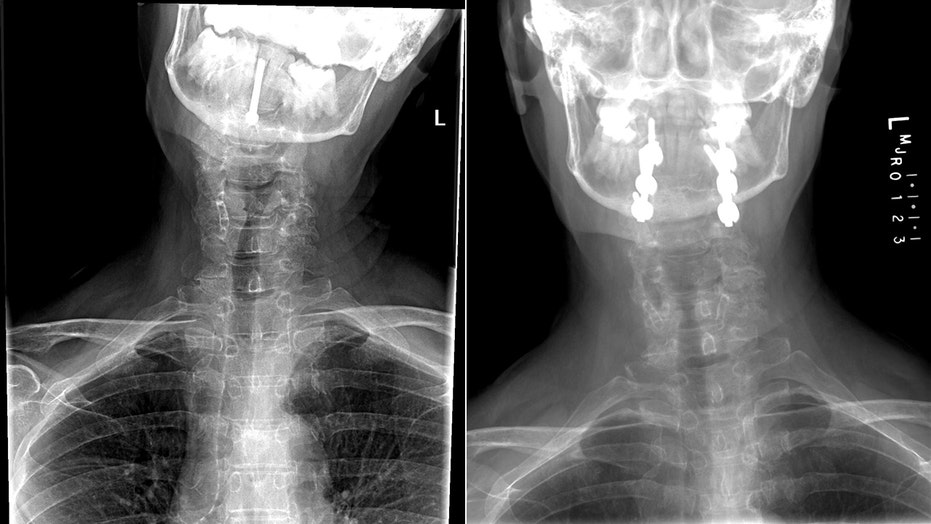 It had been two months since Ruth Bobeczko fractured her neck while vacuuming and had a screw put in to fix it, but the pain was too much for her to even leave the house. She returned to her surgeon, who allegedly said it was because she wasn’t working hard enough in physical therapy – but she hadn’t even been able to start the healing exercises because of the excruciating pain.

Ruth Bobeczko, pictured before her surgeries, had fractured her neck while vacuuming in her home.  (Courtesy of Ruth Bobeczko)

It wasn’t until a trip to her primary care physician for pain management landed her in the office of Dr. Richard Lee at the Hoag Orthopedic Institute in Irvine, Calif., that she learned her C1 ring had flipped horizontally to rest on her C2 vertebrae, which was preventing her from turning her head from side to side and had resulted in a crooked posture, also known as a “cock robin” positioning.

BOY, 12, SURVIVES 'FREAK' TRAMPOLINE ACCIDENT AFTER SPRING SHOT THROUGH BACK 'LIKE A BULLET'

Lee, a Harvard Medical School-trained spine surgeon, told his 70-year-old patient that she, unfortunately, would need to head back to the operating table, but not in the way that many people assume neck surgery is done. Bobeczko would also soon learn that Lee would possibly need to separate her skull from the rest of her body in order to completely free her from pain.

Several weeks after a surgeon placed a screw meant to fix her fracture, she developed a cock robin posture and was in excruciating pain. (Courtesy of Ruth Bobeczko)

“There’s no special trick to this – you have to do it very slowly and very meticulously.”

Lee and his team were hopeful that if steps one and two were successful in alleviating her pain, they wouldn’t have to advance to step three. But nearly two weeks after they had operated on Bobeczko, her pain had only decreased by about 10 percent, so she was faced with the high-risk procedure of step three, that would require Lee and his team to access her spine through an incision in her mouth.

“The body had healed so that the C1 ring had flipped laterally on the C2 ring – the only way to fix something like that was to do a high-risk procedure of going in there and completely cutting across the C1/C2 joint, releasing all of the ligaments that were contracted and the joint capsule that was contracted, completely separating the C1 ring off the skeleton and realigning the lateral shift,” Lee said.

These X-rays show Bobeczko's crooked posture on the left, and the result of Lee's radical approach which involved re-breaking her neck and separating her skull from the rest of her body to realign it to the original position. (Couresty of Ruth Bobeczko)

What made the procedure especially risky, was that Lee and his team had to go in through an incision in Bobeczko’s mouth, which could welcome the opportunity for “catastrophic infection.” They also faced the challenge of avoiding the major blood vessels located near the C1 area that lead to the brain.

“There’s no special trick to this – you have to do it very slowly and very meticulously,” he said. “You have to break through the mouth, through the back of the throat.”

Bobeczko, who has been a flight attendant for 50 years, said she is hopeful to return to her job when she is fully recovered. (Courtesy of Ruth Bobeczko)

The risk paid off, as Bobeczko just weeks later is back at home working toward returning to her job as a flight attendant.

“My pain is gone, I have a little neckache at night time depending on how long I’ve been walking – I go walking every day with my neighbor, she comes and gets me and we just walk around the complex,” she said.

Bobeczko will remain in a brace for several more weeks, but has taken to calling Lee her “miracle worker.”

“He literally saved my life,” she said.