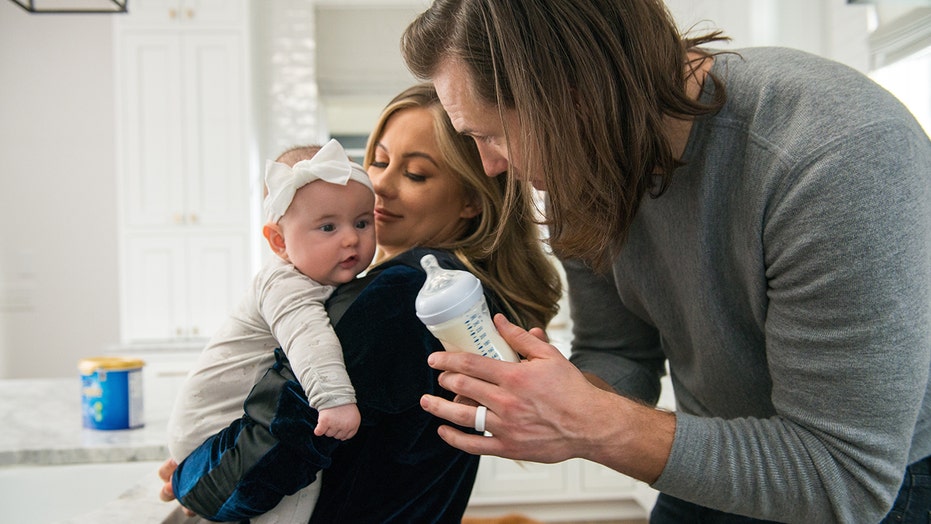 Shawn Johnson East and her husband Andrew are grateful for the chance to share their journey into parenthood with their millions of fans and followers, but that also means opening the door for criticism with every post they publish.

“I feel like I had pretty thick skin in regards to me – so I’m fine if anyone attacks me or criticizes me,” the 28-year-old Olympic gold medalist told Fox News. “But don’t criticize my husband, and don’t criticize my child – I don’t think anything prepares you for that.”

Johnson East recently faced an onslaught of criticism for a video she posted of 3-month-old Drew on the beach while she carefully guided her through her “first flip.” She said she expected some backlash after a video of her doing a flip on a trampoline during her pregnancy garnered a similar response, but when commenters started claiming that she was putting her daughter’s life in jeopardy, “that’s when I snapped.”

“I would never jeopardize the health and safety of my child,” she said, adding that the comments have added to the stress of being a new mom.

“I think it’s really challenging,” she said of parenting in the age of social media. “It’s something that I had to fight this whole time with the support of my husband. I feel like as a new mom you really don’t know what you’re doing and you’re relying on research and pretty much your gut instinct, but everybody keeps giving you their opinions on what’s right and wrong.”

So when Andrew found her in a “puddle of tears” in Drew’s nursery one night after she couldn’t produce enough milk to feed her, they knew supplementing with formula was the right move for all of them, and that everybody’s parenting journey looks different. But knowing what was best for their daughter didn’t stop the critics from weighing in.

“Going into pregnancy and having Drew, it was a no-brainer that I was going to breastfeed, I thought that’s just how it worked,” she said. “I had Drew and she just didn’t latch. I’d be in a puddle of tears on the floor because I didn’t know what to do and how to navigate the transition from breastfeeding to bottle-feeding and I got a lot of input that I was not doing the right thing for her, which as a mom made me feel really guilty.”

After consulting with their pediatrician, nurses and friends, she and Andrew began researching which formula would be best to for Drew before they landed on Enfamil Enspire. About a month later, the pair began a partnership with the company to help educate others on choosing a formula.

Through it all, the new parents said the challenges of having a newborn have reminded them of the importance of being flexible, and that sometimes plans have to get tossed out the window.

“I had someone once overhear a conversation I was having that I was planning on giving birth naturally, and I planned on breastfeeding and all these things,” Johnson East said. “I caught them laughing and I said ‘What?’ and she said, ‘It’s not really up to you it’s up to the baby.’”

Andrew East, who is “so impressed with how strong” his wife has been, said part of the journey, they’ve learned, is “taking things as they come, and figuring it out along the way.”

“It’s good to try to think through what your preferences are, but prepare to be flexible,” he said.