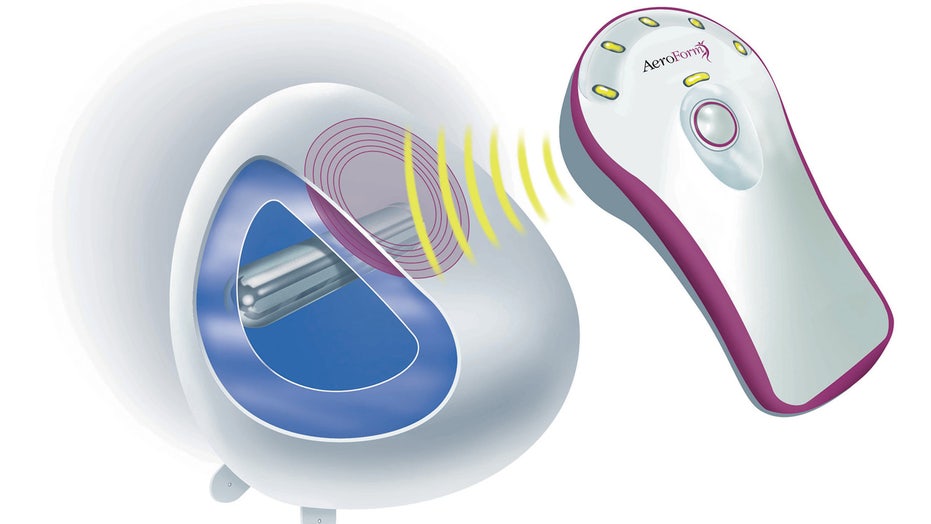 Traditionally expanders are placed under the chest wall during a mastectomy with reconstruction and then they need to be filled with saline for weeks before an implant can be placed. Aeroform is a new technology that is allowing patients to self-administer carbon dioxide that does the same job in less time and with little pain

As 35-year-old Luincys Fernandez prepared to welcome her second child into the world, a lump on her right breast during her third trimester gave the mom reason to believe something else was brewing inside her.

“I was giving birth, so it was a new life, but also the possibility of losing mine,” Fernandez, of Bogota, New Jersey, told Fox News of her then unconfirmed breast cancer diagnosis. “Being in that situation can definitely take a toll on you.”

Fernandez had long performed a breast self-exam and was familiar with signs of the disease. So at weeks 34 and 36 of her pregnancy, she underwent an ultrasound and a biopsy, respectively, but neither scan offered conclusive results.

In July 2015, she had her son, and two weeks later, a lumpectomy confirmed her fear: She had breast cancer. She underwent a mastectomy in January 2016 and immediate breast reconstruction.

Reconstruction traditionally involves placing expanders under the chest wall, and then filling the expanders with saline over several months as the skin stretches. The process can take several months and pose discomfort. Next, doctors usually implant the breasts during a second surgery.

Now, there’s a new solution called Aeroform, an expander that allows the patient to self-administer doses of carbon dioxide. With saline injections, a doctor administers an average of 60 cubic centimeters (cc) of liquid, which can be painful, Dr. Jeffrey Ascherman, site chief of the division of plastic surgery at New York-Presbyterian Columbia University Medical Center, told Fox News. With the Aeroform, each dose releases 10 cc of carbon dioxide.

The Aeroform has three built-in safety mechanisms to ensure the patient doesn’t accidentally administer too much.
1. Only one dose can be given every three hours.

2. Only three doses can be given in one day

3. Once a patient has reached her capacity, she can’t continue to dose

“Aeroform is really the first major change in tissue expansion in the last 40 or 50 years, because instead of the woman coming in and [the doctor] putting in this large syringe and needle, she can do it at home, she can do this at work, and there’s no needles,” Ascherman said.

Fernandez was one of 150 women who took part in the Aeroform clinical trial at New York-Presbyterian Columbia University Medical Center that ran from 2011 to 2015.

“Using it was very easy,” she said. “It was just holding the remote control, waiting for it to find the signal, and once you found the signal, to press it  on and then it would light up and that’s one dose.”

The study finds the median number of days from start to finish was 21, versus 45 with saline.