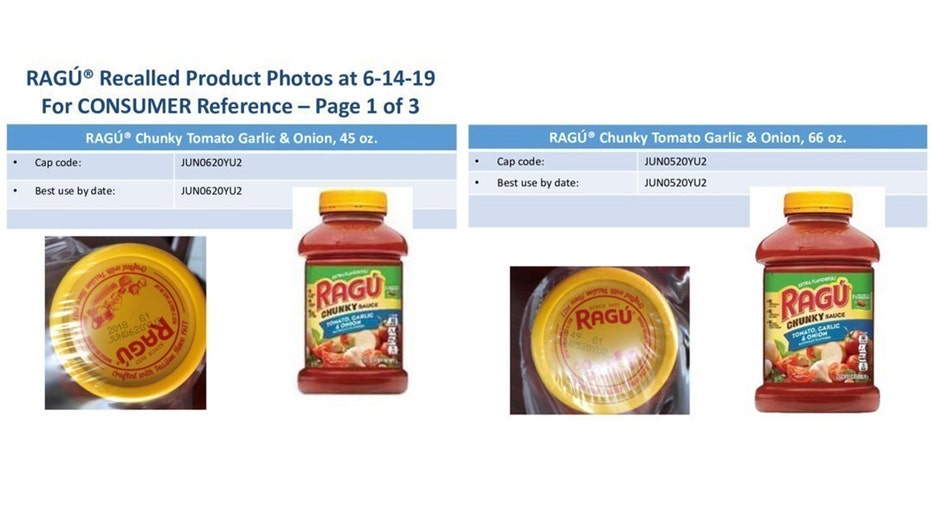 Anyone who may have purchased varieties of a popular brand of pasta sauce is urged to double-check the label over concerns it may contain fragments of plastic.

Mizkan America Inc. announced Saturday that certain Ragú pasta sauce varieties are subject to a voluntary recall out of an "abundance of caution."

"There have not been any reports of consumer injuries or complaints," the company said in a news release.

The sauces were produced between June 4-8 and distributed nationally, according to the company. Mizkan America said it believes the majority of the production run is "in its control," but some of the cases were shipped to customers.

"Mizkan is working together with these retail partners to ensure that these Ragú varieties with the specified case/cap codes are removed from grocers nationwide," the company said.

Varieties of Ragú pasta sauce were under a voluntary recall over concerns there may be fragments of plastic inside. (Mizkan America, Inc.)

The affected sauces include:

The products included in the recall can be identified by a yellow jar cap as well as the best use by dates that are listed by the company.

One of the affected grocery chains said two of the varieties were sold at its stories.

"Consumers who have purchased these products are urged not to consume them," Publix Super Markets said. "These products should be discarded or returned to the place of purchase for a refund."

Mizkan said that customers who purchased the affected sauces with the cap codes can contact a customer service hotline for a replacement coupon, and to have any sauces picked up for further examination.