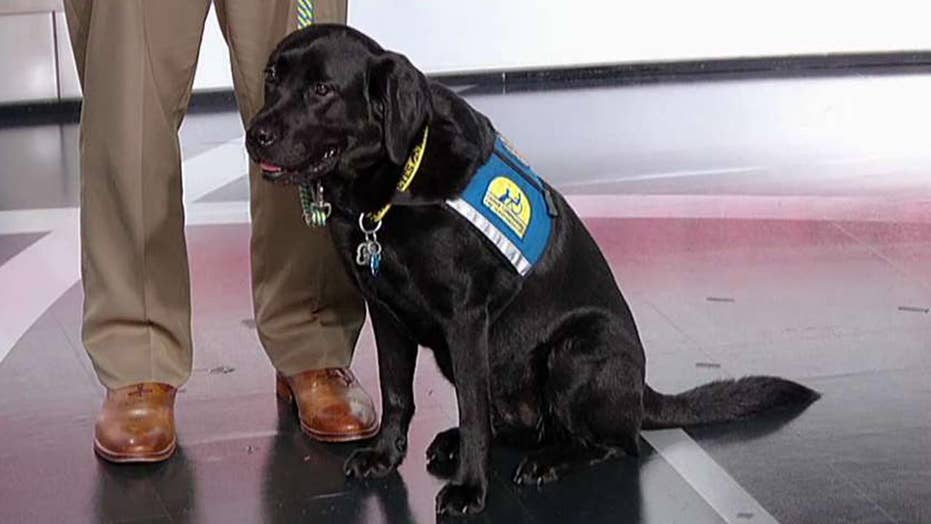 Retired Marine Caleb Davisson opens up on how his Canine Companions dog Velvet gives him a sense of purpose.

More than 16 years after cleanup was completed at the site of the September 11, 2001 attack on New York City’s World Trade Center complex, many who worked at the disaster site still struggle with post-traumatic stress disorder (PTSD) and may also have an elevated risk of heart attack and stroke as a result, researchers say.

Among more than 6,000 men and women who worked at “ground zero” in the last few months of 2001, the risk of heart attack or stroke more than 10 years later was up to three times higher among those with PTSD, the study team found.

Neither exposure to dust from the site, nor depression explained the results, researchers note in the journal Circulation: Cardiovascular Quality and Outcomes.

“The message for everyone suffering from PTSD, whether they are men or women, is that they are at higher risk of heart attack and stroke,” Morabia told Reuters Health. “And they should very seriously try to reduce their classic risk factors for cardiovascular disease, such as smoking, high cholesterol and high blood pressure.”

A person can develop PTSD after experiencing a traumatic event, such as war or violent crime, a natural disaster, physical abuse, sexual assault or a horrifying accident. People with PTSD often feel stressed, anxious and afraid long after the initial trauma has passed and they can be plagued by flashbacks, nightmares, trouble sleeping and other distressing symptoms.

Morabia and his colleagues analyzed data on 6,481 non-firefighter, blue collar workers and volunteers who participated in rescue, recovery and clean-up activities at ground zero in the initial days and months following the World Trade Center attack. These men and women began participating in a long-term, in-depth health monitoring and treatment program in 2002.

For the current study, researchers focused on the workers’ health status during the years 2012 to 2016, examining their medical records and their responses in personal interviews. The study team also adjusted their analysis to account for how much dust workers were exposed to at the site, diagnoses of depression, as well as blood pressure, blood fats, weight and smoking.

About 20 percent of the men and 26 percent of the women had PTSD during the study period - a rate roughly double that of the general population, researchers note. Overall, rates of heart attack during this follow-up period were 2.22 times higher among study participants with PTSD compared to those without it, and rates of stroke were 2.51 times higher with PTSD.

In men with PTSD but free of depression, rates of heart attack and stroke together were 1.88 to 2.27 times higher than in men without PTSD. There was little difference in the results between men and women.

Morabia said he hopes the new findings will encourage officials to add heart disease to the World Trade Center Health Program’s covered conditions, which currently include respiratory illnesses and a variety of cancers.

No one knows exactly how PTSD might work to increase the risk of heart disease, but Morabia suspects the psychological condition “may stimulate the production of inflammatory cells that then go into the blood vessels and create atherosclerosis.”

One big advantage this study has over previous ones linking PTSD to heart disease is that it followed people over time to see who experienced heart attacks and strokes, said Dr. Mark Huffman of Northwestern University’s Feinberg School of Medicine and the Bluhm Cardiovascular Institute at Northwestern Medicine in Chicago.

Huffman, who wasn’t involved in the study, said future research should look into whether treatment of PTSD would lead to a reduction of cardiovascular events.

But even without that, he said, “if I am taking care of a patient with PTSD, I really want them to get treatment for PTSD.”

“The nice thing about this study is that it has very good follow-up and clear measurements. That sets it apart,” said Dr. Katie Berlacher of the University of Pittsburgh Medical Center, who wasn’t involved in the study.

And that means there’s a good chance that PTSD will be added to the list of risk factors for cardiovascular disease, Berlacher noted. “It’s good for us to have something like this to say we have proof now. So we’ll be able to say this is something you should treat, just like you treat hypertension.”