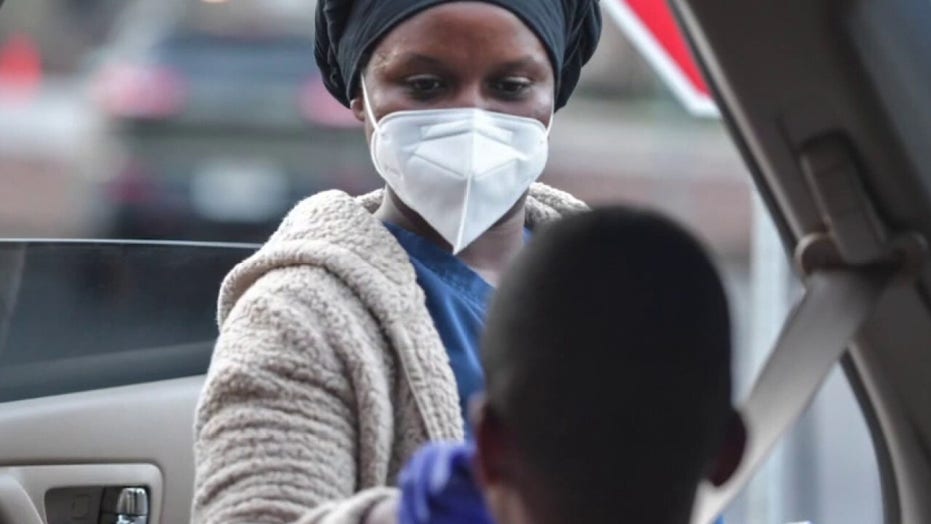 Ms. Hetherington eventually got a biopsy and is currently being treated with a type of chemotherapy which she says has a good likelihood of working on her type of cancer. But as a consequence of the delayed biopsy, she said she missed a window to enroll in a clinical trial that could have offered her treatment with immunotherapy.

"Maybe at this point I would be further ahead in my treatment," Ms. Hetherington said. "I felt like I was being let down. When you have stage four cancer that is aggressive and incurable, you don’t want to hear that."

Philippa Hetherington said that due to the pandemic-related delays, she missed a window to enroll in a clinical trial that could have offered her cancer treatment with immunotherapy.

Ms. Hetherington had her blood taken as part of her cancer treatment in London earlier in December.

COVID-19 has slammed hospitals and stretched healthcare systems, in turn resulting in canceled doctors’ appointments and delayed procedures and tests for other illnesses. According to the World Health Organization, the pandemic has triggered a separate, global crisis among patients with conditions like cancer, diabetes and heart disease who were unable to get—or who put off—timely care because of healthcare systems overrun by COVID-19.

In most places, it is hard to quantify how many people delayed or forwent healthcare during the pandemic. But in the U.K., thanks to a centralized, government-funded healthcare system, officials have been able to keep track.

At the end of October, the number of people in England who were on the waiting list for an elective procedure—one that is usually planned in advance and isn’t life-threatening enough to require emergency attention, like a colonoscopy or knee surgery—hit six million. The United Kingdom's total population is reportedly about 68 million.

To help combat Omicron, the Biden administration is opening up more COVID testing sites and delivering 500 million COVID tests to Americans. WSJ’s Daniela Hernandez breaks down why testing is still a pain point in the U.S., two years into the pandemic. (Photo Illustration: David Fang)

That is up 41% from March 2020, just as the pandemic started to take hold here, according to data collected by the U.K.’s National Health Service. More than 300,000 of those now on the list have been waiting for their procedure for over a year, compared with only about 3,000 people in March 2020, according to the data.

The proportion of people in the current financial year who were able to see a cancer specialist within two weeks after a referral from a doctor dropped to less than 85%, compared with more than 90% pre-pandemic, according to the NHS data. An analysis based on NHS data by the charity organization Macmillan Cancer Support found that in the first 18 months of the pandemic, the number of patients starting cancer treatment in England fell by more than 33,000 compared with the 2019 average.

Delays in care, which had eased after the surge in cases of the Delta variant over the summer, could return with Omicron’s spread.

Sajid Javid, the U.K. health secretary, said that in the coming weeks, staff in the National Health Service would be redeployed away from nonurgent care. "All primary care services will focus on urgent clinical needs and vaccines," he said, adding that the national mission to curb the spread of the virus comes with some "difficult trade-offs."

CHINA PUTS CITY OF 13 MILLION IN LOCKDOWN AHEAD OF OLYMPICS

The secretary previously had said that he expected wait lists for nonurgent care to lengthen as the country headed into winter, and that about seven to eight million people stayed away from hospitals during the height of the pandemic and now needed to be cared for.

Delays are common even in the best of times for the U.K.’s universal healthcare system, where medical care is provided at almost no cost to patients, and the system rations care based on urgency. Researchers and doctors say that the pandemic has exacerbated issues in a system that was already running close to capacity.

Shirley Cochrane of Colchester, England, completed breast-cancer treatment in September 2017 when she was told she would need a follow-up every six months. Then the pandemic hit, and Colchester Hospital informed her that she would need to self-examine her breasts at home and monitor for possible symptoms herself.

"To be cut off from the health system, I felt a little bit abandoned," she said, adding she felt anxious she might miss something in her breasts that a professional would detect during a follow-up appointment. "I’ve had so many sleepless nights."

Shirley Cochrane said pandemic-related delays with her cancer treatment made her feel ‘a little bit abandoned.’

Ms. Cochrane was able to get a mammogram in May of 2020 but hasn’t had another since and hasn’t had any further checkups. She said she hopes to be seen by a specialist next year, though she is unsure of when that could be.

The East Suffolk and North Essex NHS Foundation Trust, which manages Colchester Hospital, said that it kept in contact with patients over the telephone during the pandemic, and that all urgent cancer treatment continued.

The U.K. government’s department of health and social care, which oversees health policy, said that cancer diagnosis and treatment are an absolute priority, and that it is backing the NHS with record investment to tackle the backlog, adding 8 billion pounds ($10.57 billion) over the next three years to deliver an extra nine million checks, scans and operations for patients across the country.

The Institute for Fiscal Studies, an independent U.K.-based research center focused on microeconomics and public policy, estimates that in an optimistic scenario, the number of people waiting for treatment could reach 9 million next year and return to pre-pandemic levels in 2025. It said that 7.6 million fewer people joined a wait list for public healthcare in England between March 2020 and September 2021, both due to cancellations and out of fear of catching COVID-19.