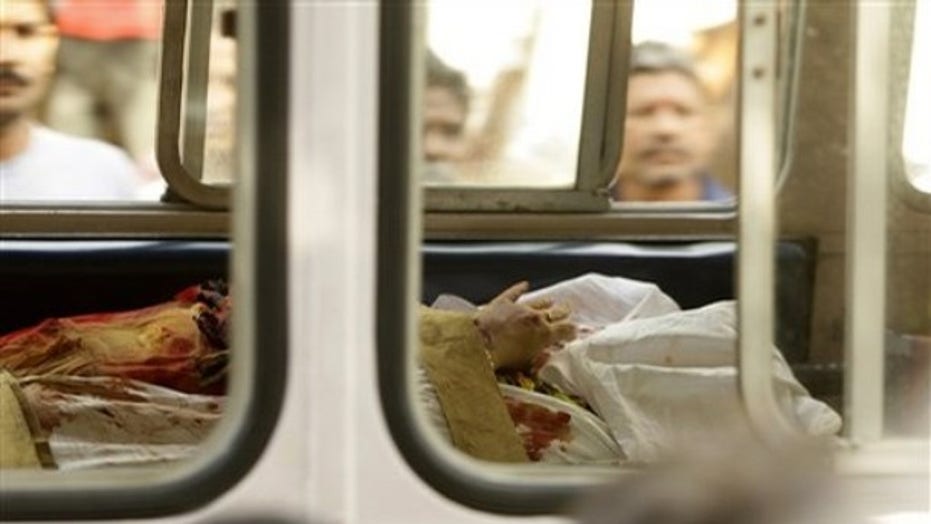 A dream vacation and a stroll through the Taj Mahal Palace Hotel quickly descended into the stuff of nightmares.

It was November 26, 2008, and it marked the Allen family’s last stop on their adventure through India when 10 Pakistani men charged buildings in the bustling city of Mumbai and carried out a series of deadly terrorist attacks.

“We had wanted to see the world,” Dr. Luis Allen, a Florida-based psychiatrist and medical director of the Center for Behavioral Health at Advent Health, told Fox News. “We went out by the pool area, and there had been a lot of weddings and fireworks going on. It was a beautiful outside patio, people were having dinner, and we wanted to take pictures but realized we didn’t bring our cameras. Instead of one of us going back to the room, we all decided to go.”

Dr. Luis Allen with his son Jonathan and wife Maxine, all survivors of the 2008 Mumbai terrorist attacks (Courtesy of Allen family.)

It was a seemingly innocuous decision that potentially saved the life of Allen, his wife, and their two sons, then aged 8 and 11.

“We heard something we thought was just fire, and (didn’t worry) much at first," Allen said. "Then it sounded like fireworks intensifying. Once we got to our room on the second floor, we started to hear a lot more. People were in shouting mode, and we could not understand, and I just knew something wasn’t right.”

Allen remembers the unfurling in vivid detail: calling the front desk which picked up but only the sounds of silence and chaos cracked on the other end, the dread that washed over him when he saw a news clip on his phone outlining that a siege was underway, his wife’s shaken face as she carefully hid their U.S. passports after learning on a news segment that the assailers were knocking down doors looking specifically to murder British and American passport holders.

“We knew we had to stay in the room, and we all hid under the bed,” Allen said. “There are a lot of bits and pieces you hear that don’t make sense. I heard a lady begging for her life, then a gunshot and then silence. It was those periods of silence that were most provoking. You don’t know what is going to be the next step.”

A girl walks past a wall of the Chabad House, with bullet marks on the eve of the tenth anniversary of the Mumbai terror attacks in Mumbai, India. (AP Photo/Rajanish Kakade)

For 48 hours, every single second was elastic – stretching out into moments of fear and self-realization as he held on to his terrified young sons.

“I really thought this was it. They were knocking down doors. Two days is a long time, and everything goes through your mind, questioning why we did this trip and just all the things you think about in life,” Allen continued.

By chance, a friend from Paris called as news of the ongoing onslaught hit the headlines, and when he realized Allen was whispering, alerted the U.S. consulate. For most of the hundreds trapped in the evolving carnage, the ordeal lasted from November 26 through to November 29. However, the Allen family was rescued on November 28 by Indian commando forces. They were whisked to the airport by U.S. officials while the nation remained under curfew, the once alive and over-stuffed streets eerily empty.

And life would never be the same again. In the end, 166 people were slaughtered – including six Americans – by the terrorists connected to Lashkar-e-Tayyiba. Nine of the 10 assailants were killed during the attacks, and the lone survivor – Mohammed Ajmal Kasab – was executed four years later.

In this Nov. 27, 2008 file photo, pigeons fly as the Taj Hotel continues to burn during terror attacks in Mumbai, India. Indian Prime Minister Manmohan Singh said Tuesday, Jan. 6, 2009, that he did not believe the November Mumbai attacks gunmen were acting alone, and Pakistani state agencies must have had a hand in the attacks. (AP Photo/Gautam Singh, File) (AP)

Back home in the sleepy contours of Orlando, the doctor slowly attempted to regain a regular sleeping pattern and return to his day-to-day routine, relying on his faith and spirituality to get him and his family through the pangs of darkness.

“You realize that there is a purpose to your life, and initially, you consider yourself to be lucky, but then you realize that you aren’t any more than 160 plus people who died,” he recalled. “I will always question what happened to all those people sitting outside eating, and the people we passed walking back to our room. It became an obsession, searching for news and photos, images of people lying dead on the ground.”

WHO IS THE FBI’S MOST WANTED AMERICAN TERRORIST? MEET JEHAD SERWAN MOSTAFA

For Allen, the event prompted a significant shift in how he viewed the world, and the preciousness of living a full life and taking his medical ambitions to even higher levels.

He was instrumental in creating the Outlook Clinic, which provides mental health care to the uninsured. He has also been a prominent voice for expanding access to mental health care within the AdventHealth system in Central Florida through the use of telemedicine. Instead of patients having to wait for an in-person assessment, AdventHealth providers claim to now do remote psychiatric evaluations as needed across our tri-county system of hospitals and ERs within one hour.

Starting this past Sunday, Allen began the World Marathon Challenge, which will see him run seven marathons in seven days on seven continents.<br data-cke-eol="1"> (Courtesy of Luis Allen)

In particular, Allen took up running after the India trip and gradually strode into the daunting arena of marathons a year later. To date, he has done more than 40. His most significant physical feat is only just beginning.

Starting this past Sunday, Allen began the World Marathon Challenge, which will see him run seven marathons in seven days on seven continents.

“I felt as though I had a new lease, and that every day I wanted to be the best I could and help,” he noted. “We have some ownership of our lives, but it is really now ours, and we are here to serve.”

Allen’s broader marathon mission is to raise global awareness about the importance of mental health, in addition to raising money for the Mental Health Association of Central Florida.

“We all want to keep (mental health problems) in the background, but we all know someone who is suffering from something. We go to the doctor if we have a fractured arm, but when it comes to mental health, we don’t want it to be there even though it is there,” he added. “This needs to change. We all know someone on the journey that needs us.”