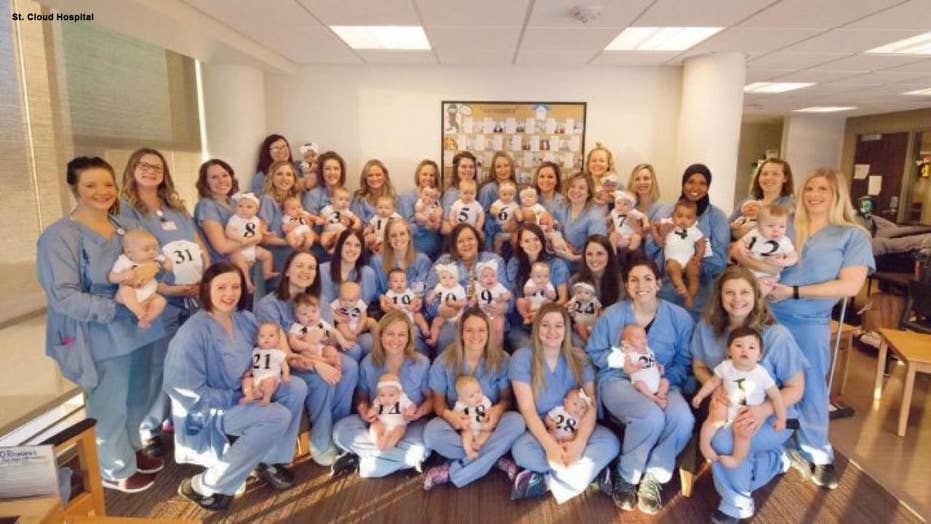 There was a serious baby boom in a Minnesota hospital. Thirty-one members of the staff at the St. Cloud Hospital’s Family Birthing Unit in St. Cloud, Minnesota, welcomed a total of 32 babies in 2018 (one had twins).

But how many of them were named Jackson or Sophia?

Thirty-one members of the staff at the St. Cloud Hospital’s Family Birthing Unit in St. Cloud, Minn., welcomed a total of 32 babies in 2018 ─ one had twins ─ doubling the previous in-house record set by staffers years before.

“A while back they had 15 or 17 in one year and that was a lot, so I think this year was overwhelming overall for the whole unit,” Dawn Henderson, a nurse who gave birth on Christmas Day, told Fox 9.

The staff said they knew 2018 was going to be a baby boom last year, with nurses, doctors and other staff members revealing more of their pregnancies “every few weeks,” according to the outlet.

“You’d walk down the hallway and there’s all of these bellies and people were like, ‘Holy cow — there’s another one,’” added health unit coordinator Gabrielle Sunder.

According to the St. Cloud Times, only about 150 staffers work in the Family Birthing Unit.

"I had staff actually coming to me and saying, 'Um, do you realize how many people are going to be on leave, all at the same time?'” Melissa Lahn, director of the birthing center, added to the outlet.

Lahn, however, says things are going to work out “fine." But nurse Ashley Thoennes, one of the 31 who gave birth, told Fox 9 she was more concerned about the kids’ future play dates.

“If we try to do a playdate, it’s going to be pure chaos,” she said.