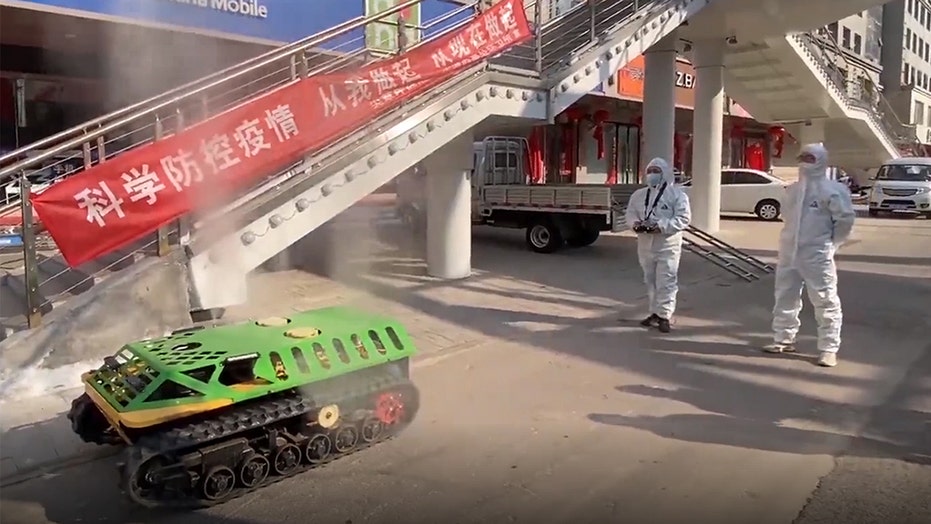 Authorities in China have resorted to using remote-control operated mini tanks to disinfect city streets amid the deadly coronavirus outbreak that’s sickened over 70,500 in the country and killed at least 1,770. The tank, which was developed by Shanxi Tianyi Technology Co. Ltd., was originally designed to disinfect prisons and can cover up to 540,000 square feet in just an hour, according to AsiaWire.

HUNDREDS PRAY AT WESTERN WALL FOR CORONAVIRUS CURE: 'GOD HAS THE POWER TO SEND HEALING'

It’s one of two currently being controlled by hazmat-wearing teams that are patrolling city streets.

The tanks, which are remote-controlled, are being used to disinfect areas with confirmed coronavirus cases. (AsiaWire)

Police officers and other local government workers have been tasked with coronavirus-eliminating duties.

“We began using them for disinfection and disease-prevention in Taiyuan on Feb. 4,” said Hou Yongei, deputy secretary-general of the Shanxi Province Unmanned Vehicle Association, per an AsiaWire report. “They were used to disinfect prisons and other high-security environments. Now, twice a day, we send them into gated communities where there have been confirmed cases.”

Hou said using the tanks cuts down the risk of transmission between workers and infected patients.

The move comes as a branch of China’s central bank has started to destroy cash in high-risk areas in an effort to stop the illness from spreading.

The Guangzhou branch of the People’s Bank of China (PBOC) ordered the destruction of all paper banknotes from hospitals, fresh food markets and buses in areas with high coronavirus case counts, the South China Morning Post reported. Potentially contaminated bills will be quarantined and sterilized before recirculation.

Authorities say the tanks are cutting down on the risk of transmission.  (AsiaWire)

On Monday, China said it would possibly postpone its annual congress next month, which is considered its biggest political meeting of the year. The military also sent an additional 1,200 doctors and nurses to Wuhan, the virus epicenter that has been on lockdown since Jan. 23. Reports of looting and hoarding medical supplies have begun to emerge as areas in the country begins to run low on inventory.