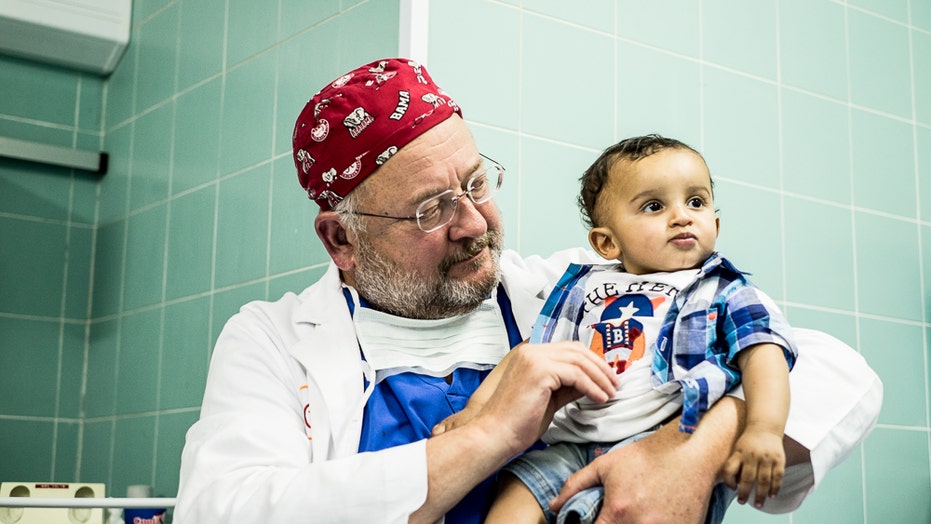 When he isn’t smoking cigars and laying low in his native of Memphis, Tenn., pediatric cardiac surgeon Dr. William Novick is battling bombs and bureaucracy in some of the most dangerous frontlines of the world.

And now he is at the forefront in promoting a different kind of U.S. diplomacy: medical foreign policy.

“We want people to know and take responsibility for presenting Americans in a positive light. We want people to know that as Americans we are caring, giving and compassionate people wanting to help,” Novick, 65, who founded the non-profit Cardiac Alliance almost three decades ago, told Fox News. “We are a high-impact group of surgeons, doctors, nurses and clinicians and we are saving children from death.

"That gives us the unique ability to change perceptions. Our teams may be international in construct, but we are always considered the ‘American Team.’”

Novick’s foundation has around 22 doctors on board, and he alone has operated on almost 10,000 children in over 30 countries ranging from Nigeria, Russia, Colombia and Bosnia to Iran, Iraq, and Libya. As the founder, Novick has received four presidential medals – Belarus and Croatia, to Nicaragua and Ukraine – and sees his carefully tuned “medical foreign policy” as an important tool in fostering not only country-to-country relationships but communications with hostile enemies.

Case-in-point the story he calls the “Taliban Boy,” which unraveled several years ago while he was working at the Armed Forces Institute of Cardiology/National Institute of Heart Disease in Rawalpindi, Pakistan. Novick had just entered the pediatric cardiac ICU when he encountered an emaciated 3-month-old baby, his skin stretched gravely around his protruding ribcage and the possibility of operating was raised by the local cardiologist.

“In conflict zones, I enter each operation knowing that each surgery – mostly open-heart – is saving a life while all around us people are dying for mere thought differences. This frequently is my first thought in the morning and last at night.”

“The child had Transposition of the Great Arteries with VSD and pulmonary hypertension (high blood pressure in the lungs). I told the cardiologist the case was high-risk, given the diagnosis and poor nutritional state, and he said the parents and grandparents wanted to proceed despite the risks,” Novick recalled. “We operated two days later, and the child did very well. I was at his bedside in the ICU when the pediatric cardiologist approached me and said, ‘You are a lucky man.’ He repeated himself after I said that the baby was the lucky one, ‘No, you are a lucky man.’”

As it turned out, the baby’s grandfather was a respected former Taliban fighter against the Americans in Afghanistan and the child was his only surviving male grandchild in the entire family.

“The implications were clear: if the child did not survive, the surgeon would not. I shrugged my shoulders and said, ‘the grandfather is a lucky man, he now has a grandson,’” Novick continued. “At the end, the grandfather approached me and, through the pediatric cardiologist’s translation, he said, ‘I never thought I would thank an American from the land of the Great Satan for anything. But I want to thank you for saving my grandson's life and changing my attitude about Americans. You are not bad people and I am going to return home and tell this to all in my village, many who are former fighters against Americans.’”

Novick is determined to continue shaping such impressions, one nation at a time.

“We are currently focused on China, Ecuador, Iraq, Libya, Russia and Ukraine. And we are hoping to secure funding this year to operate on Lebanese and Syrian refugee children as well as Nigeria,” Novick said. “But we have more requests than we can fill.”

And it is that nagging need to bring a chance at life to some of the poorest places on the planet that keeps the father-of-four in airports and on his toes.

“In conflict zones, I enter each operation knowing that each surgery – mostly open-heart – is saving a life while all around us people are dying for mere thought differences,” he asserted. “This frequently is my first thought in the morning and last at night.”

Novick pointed out that the main cause of congenital heart disease is genetic, but there are other factors at play.

“Environmental factors affecting the parents, such as nuclear radiation in Chernobyl, Fukushima, or uranium depleted bullets in Ramadi and Fallujah as well as maternal infections in the first trimester like measles and nutritional deficiencies – folate –  play a role,” he said. “Also, consanguineous marriages – first cousin to first cousin – have been reported to increase the incidence to as high as three percent, so we see more congenital heart disease in the Middle East North Africa countries.”

Novick’s crews also train and educate local surgeons, nurses and clinicians so that they can continue saving lives long after the “American Team” has left — and whenever possible, he endeavors to stay in touch with the babies who have had the chance to stand healthily the passage of time.

“We were in the city when the bombs started falling that first Wednesday night – we were operating on a 10-day-old boy,” added Novick of his first encounter with conflict – Belgrade, Serbia when NATO bombs rained down in March 1999. “His mother, Sanja Antonijevic, recently wrote to me on the 20th anniversary of the start of the bombing, thanking me for not giving up on her son that night and for operating throughout the bombing. He is now 20 years old and his name is Luka. That day we operated on two complex newborns — both survived and none of our team suffered any harm during the two nights of bombing.”