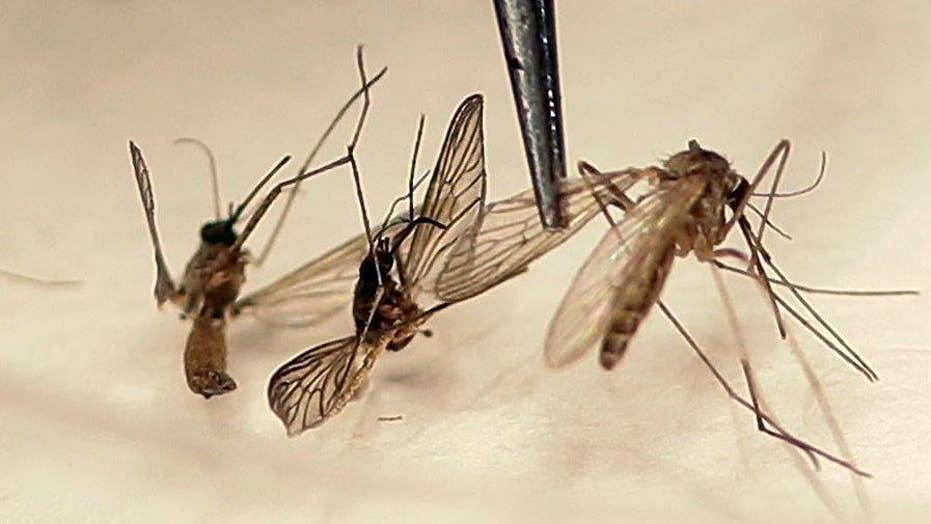 Florida is investigating whether there is possibly a third active transmission zone in Miami-Dade County; Phil Keating reports for 'Special Report'

Florida Gov. Rick Scott said Tuesday that the state has confirmed five new non-travel related cases of Zika, including one in the Tampa Bay area, though officials have not declared that a zone of active local transmission.

The news comes just a day after Scott called on federal health officials to send the state more resources to fight the growing transmission of Zika virus. The Miami Herald reported that Florida is still waiting for the Centers for Disease Control and Prevention (CDC) to send the state an additional 5,000 Zika antibody tests and 10,000 Zika prevention kits, as well as a promised $5 million in funding, to help combat Zika.

The number of locally transmitted cases in Wynwood and Miami Beach had reached 37, but Tuesday’s addition of four new cases brings the total to 41. State officials had predicted Monday that the number will rise in the coming weeks without swift mosquito eradication in the area.

The CDC is expected to fulfill Scott’s order for the additional supplies on Tuesday, the Herald reported.

The Herald reported that among the conversations that took place during the meeting, Levine criticized Scott for not keeping the city informed of new local Zika cases as they arise.

“It’s important that myself, the city manager, [and] our counterparts at the county are getting timely, accurate information as fast as possible,” Levine said during the meeting, according to the Herald. “As you know, we have our constituents. We have our businesses ... we’ve just got to have that information.”

Scott had told reporters a few hours earlier that he had publicly announced the Miami Beach cases within hours of their confirmation Friday morning. He responded to Levine’s concerns after the meeting by criticizing him for not attending previous local meetings organized to address Zika.

“Everybody’s had the opportunity to participate,” Scott said, according to the Herald.

As of Monday, State Surgeon General Celeste Philip told the Herald there were no new local cases to report. But there were seven additional travel-related cases, consisting of four in Miami-Dade, two in Osceola and one that involves a pregnant woman, bringing the state’s total to 600 Zika cases so far this year.

To monitor Zika locally, the state has trapped and tested about 32,000 mosquitoes, including 6,000 in Miami-Dade, and none have tested positive for the virus, Florida Agricultural Commissioner Adam Putnam told the newspaper.

Scott assured local officials during the Monday meeting that the state would be sending $5 million to aid the county’s mosquito control efforts, the Herald reported.

Gimenez, who estimated the county would need to spend about $8 million to combat Zika, said he was “very happy” to know a check was en route.

“We’ll be waiting for it,” Gimenez said.