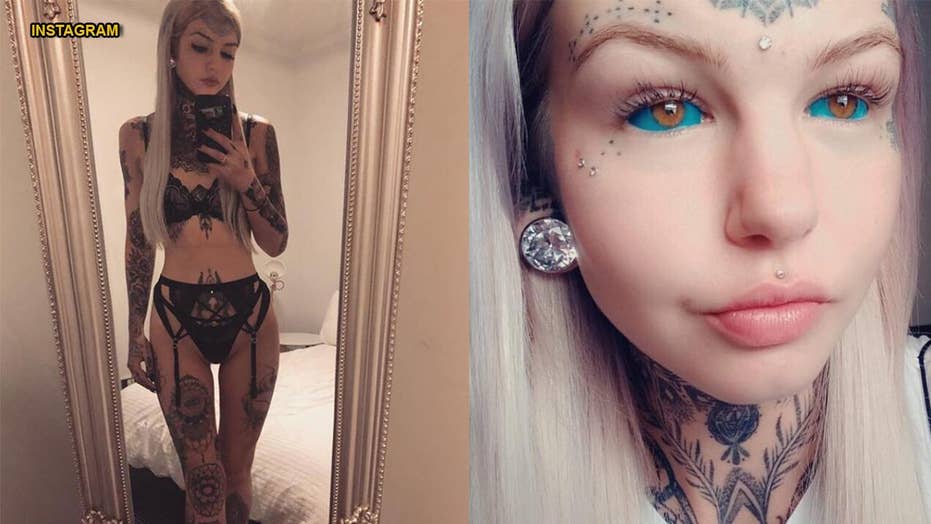 Amber Luke, known as 'Blue Eyes White Dragon' on Instagram, reportedly went blind for three weeks after tattooing the whites of her eyeballs blue. The body modification enthusiast is said to have spent over $25,000 on extreme procedures such as splitting her tongue.

A woman who’s allegedly spent upward of $25,000 modifying her body with extreme procedures, such as splitting her tongue and having pointed implants placed in her ears, is alleging that she went blind for three weeks after tattooing the whites of her eyes blue.

“I can’t even begin to describe to you what the feeling was like, the best thing I can give you is once the eyeball was penetrated with the ink, it felt like [the tattoo artist] grabbed 10 shards of glass and rubbed it in my eye,” Amber Luke, of Australia, told Barcroft Media, according to The Sun.

Luke, who goes by “Blue Eyes White Dragon” on Instagram, told the news outlet that she first became fascinated with modifying her body at age 16. But now, eight years later, she may be done with the “extreme” procedures.

“Unfortunately, my artist went too deep into my eyeball,” she told Barcroft Media, adding that she still aims to be completely covered in tattoos by March 2020. “If your eyeball procedure’s done correctly, you’re not supposed to go blind at all. I was blind for three weeks. That was pretty brutal.”

Dr. Matthew Schulmann, a Manhattan-based board-certified plastic surgeon who did not treat Luke but previously provided comments to Fox News on the dangers of eyeball tattooing, said the procedure involves breaking through the eye’s outer coating, which could welcome an infection.

“It’s done with eye dye injected just under the outer layer of the eyeball, so that it actually will stain and color the surface of the eye, but you have to get through the outer coating,” Schulmann told Fox News in 2016. “Any time you inject a sharp object into the eyeball there’s chance of infection, corneal infections or tears, or a global rupture — which is a rupture of the actual eyeball.”

Rarely do such extreme body modifications take place in a board-certified plastic surgeon’s office, according to the American Society of Plastic Surgeons. Often the consumer’s desired look is achieved through dermal and solid silicone implants in procedures performed by body modification artists.

“Be aware these come with significant risks, especially in thin skin areas like the top of the foot and tailbone,” Dr. Nelson Castillo, an ASPS surgeon said recently in a Q&A.

It’s not clear what injury Luke actually sustained, but evidence of the whites of her eyes turning blue is dates back to 2017 on her Instagram page.

Luke, who boasts over 140,000 followers on Instagram, often documents her latest trips to the tattoo parlor for her fans while plugging the artist or shop. One of her recent postings featured her latest winged eyeliner tattoo, while another showed off her blue- and pink-dyed “mermaid hair.”

Luke’s mother, Vikki, told Barcroft Media that while she initially cried over her daughter’s decision to tattoo the whites of her eyes, she has done her best to support her daughter over the years, per The Sun,

“As we know as the parents, some kids will just do what they want to do, regardless of what we say,” she told the news outlet. “But I brought her into the world with the best skills that I could give … it’s just for me to be there and go along the journey with her. And prop her up, and love her.”

Luke’s mother said her daughter “never saw herself as beautiful,” and that Luke was diagnosed with depression at 14. She said that through the various modifications, she’s watched her daughter’s growth and confidence soar.

“I think that over time, I’ve learned to actually understand that it doesn’t change you,” she told Barcroft Media. “It’s the society’s perception on it.”