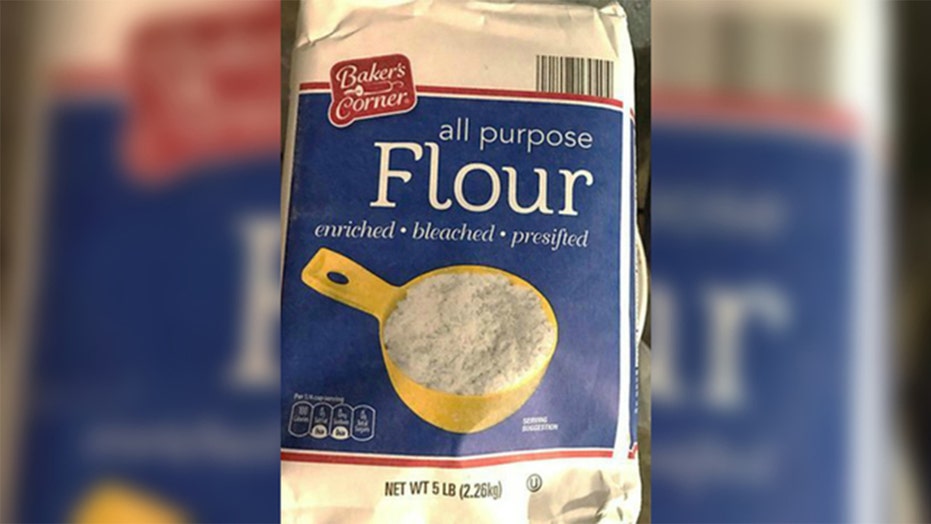 A grocery store chain has issued a recall for bags of flour over concerns about E. coli contamination after at least 17 people have been sickened in eight states.

ALDI said in a news release on Thursday that 5-pound bags of Baker's Corner All-Purpose Flour made at an ADM Milling Co. production facility in Buffalo, N.Y., may have the presence of E. coli.

OVER 62,000 POUNDS OF RAW BEEF RECALLED OVER E. COLI CONCERNS

"Out of an abundance of caution, ALDI has recalled all best if used by dates and all lots of Bakers Corner All Purpose Flour products produced by ADM Milling Co. in Buffalo, N.Y., from store shelves in these states," the company said in a news release.

Five-pound bags of Baker's Corner Flour sold at ADLI stores have been recalled over concerns about E. coli contamination. (Centers for Disease Control and Prevention)

The Centers for Disease Control and Prevention said that 17 people in eight states have been sickened with a strain of E. coli. The reports of the illness started on Dec. 11, 2018, to April 18, 2019 and affected people ages 7 to 86.

"Epidemiologic and laboratory evidence indicates flour is a likely source of this outbreak," the CDC said.

Three people have been hospitalized, but no deaths have been reported, according to the CDC.

"This investigation is ongoing. FDA is working to determine whether other brands or lots of flour may be potentially contaminated and need to be recalled," the CDC said. "CDC will provide updates when more information is available."

Symptoms of E. coli can vary in people, but often include severe stomach cramps, diarrhea (often bloody), and vomiting, according to the CDC. Most people get better within 5 to 7 days and sustain a mild infection, but others can be severe or life-threatening.

"Some people with an STEC (E. coli) infection may get a type of kidney failure called hemolytic uremic syndrome," the CDC sates.

ALDI said if customers have the product affected by the voluntary recall, they should discard it immediately or return it to their local store for a full refund.

"Consumers are reminded to not consume any raw products made with flour. Flour is an ingredient that comes from milling wheat, something grown outdoors that carries with it risks of bacteria which are rendered harmless by baking, frying or boiling," the company said. "Consumers are reminded to wash their hands, work surfaces, and utensils thoroughly after contact with raw dough products or flour, and to never eat raw dough or batter."