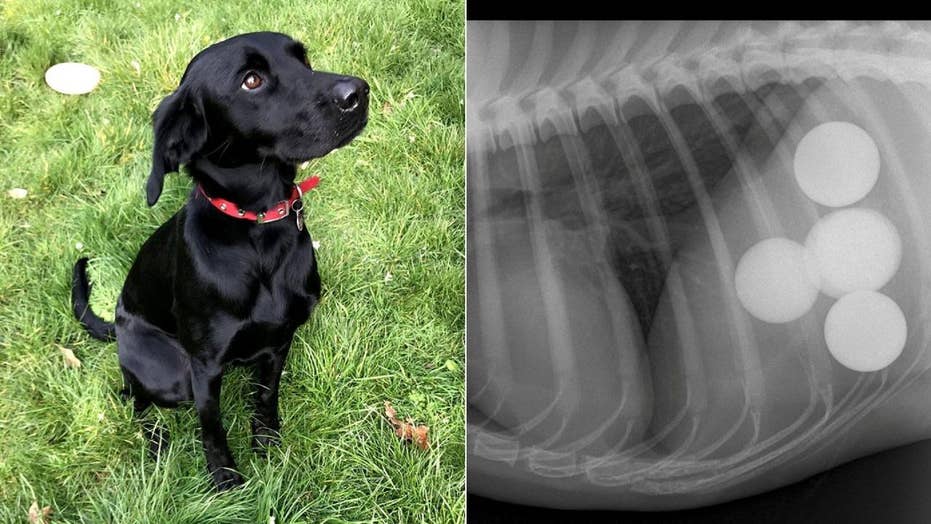 Dog is mysteriously sick until the vet realizes it's because the dog swallowed five golf balls.

When a lethargic pup landed in the vet’s office with his concerned owner, nobody suspected that the Springer Spaniel-Labrador mix had eaten not one, but five golf balls during his daily morning walks.

For a few months prior to his visit, Louis had been getting sick and started dropping weight, which his owners thought was an adverse reaction to his food.

His vet said he was "incredibly lucky."  (SWNS)

“When he initially became ill we changed his food and became much stricter with his diet,” Rebecca Miles told SWNS. “He always seemed lethargic at home but when we took him out for walks he was his usual bouncy self. When he continued being sick, we took him back to the vet.”

Miles said she took Louis for daily walks outside their Birmingham, West Midlands, home, which is located near a golf course. She said she noticed her pup picking up the golf balls, but that he would drop them when she told him to.

“I never imagined he accidentally swallowed some of them,” she told SWNS.

When an X-ray revealed ball-shaped objects in his stomach, Miles immediately knew what it was. His vet, Emily Moss, performed surgery to remove the balls, and said he is “incredibly lucky.”

Louis is expected to make a full recovery, and his appetite has already returned.