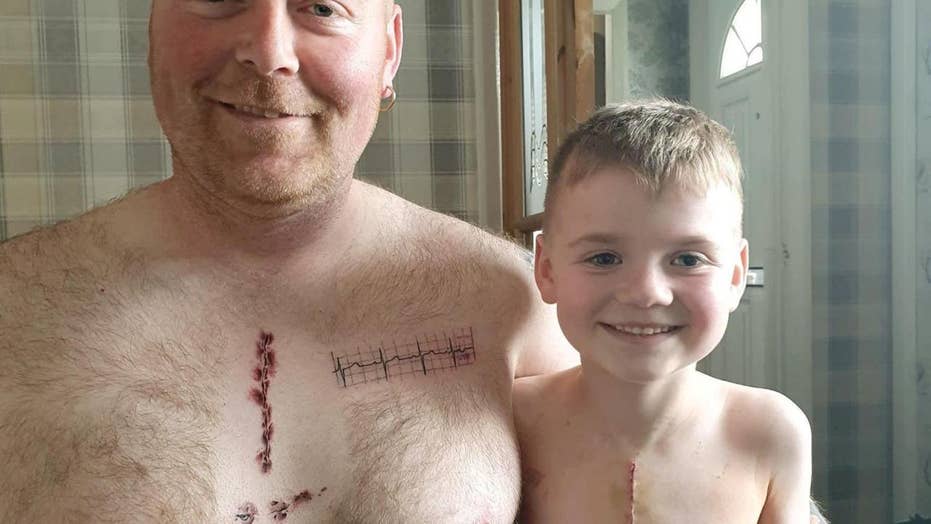 A father’s love landed him in the tattoo parlor, where he requested a 3.5-inch scar to be inked on his chest so that he could match his 6-year-old son's, who had life-saving heart surgery last month.

Martin Watts, whose son Joey was diagnosed with supravalvular aortic stenosis (SVAS), said his older son Harley also has the condition and will undergo the same surgery later this year, SWNS reported.

“It’s not easy for a 6-year-old boy or any child of any age to have that type of surgery,” Leanne Watts, the boy's mother, told the news outlet. “When Joey saw the scar, he just said, ‘Is this where they have cut me to fix my heart’? We’ve told him it should be something to be proud of and he shouldn’t be ashamed by what has happened to him.”

Martin Watts got inked with the tattoo to match his son Joey, who underwent a life-saving open heart surgery at Leeds Children's Hospital four weeks ago. (SWNS)

SVAS is a heart condition that develops before birth and causes "the narrowing of the large blood vessel that carries blood from the heart to the rest of the body,” according to the U.S. National Library of Medicine. If the condition is left untreated, it can lead to shortness of breath, chest pain and ultimately heart failure. Some patients may die in infancy, while others may never experience symptoms of the disorder. SVAS is estimated to occur in 1 in 20,000 newborns worldwide.

Joey’s older brother, Harley, 7, was diagnosed while still in utero, but his mother, Leanne, said she didn’t find out about her younger son’s heart issues until 14 weeks after he was born.

“From when they were first born, they told me there was nothing they could do, we would just have to live with it,” Leanne Watts told SWNS. “I was told they could both pass away at any given point. Joey’s condition progressed rapidly. They said if we didn’t try something now the inevitable will be sooner rather than later.”

Joey underwent an eight-hour procedure on May 23 at Leeds Children’s Hospital and was discharged on May 28. His parents told SWNS that he is recovering well, but faces more procedures in the future. Harley is set for his first surgery later this year.

“You take comfort from the way surgeons at Leeds handled things with Joey,” she told SWNS. “It will be just as scary but they have given you reason to believe. I thought superheroes wore capes, they don’t, they wear surgical scrubs and gowns.

“It’s absolutely fantastic, it just shows him it’s nothing to be scared of and that he should be proud of what he has achieved in life,” she told SWNS.