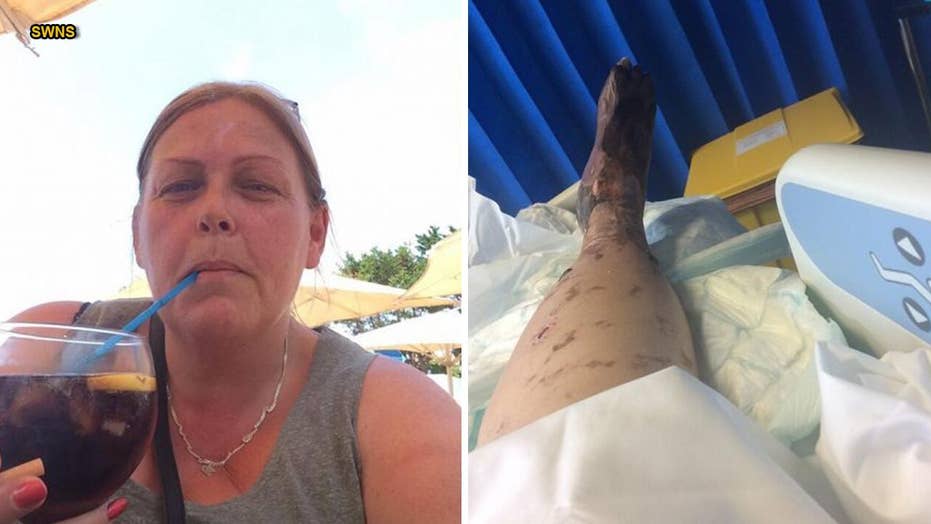 After a night out with her friends, Sarah Hayward of Gillingham, Kent, lost both of her legs to meningitis. Hayward said she initially thought someone had spiked her drink, as she only had one that evening before her symptoms set in. After landing in the hospital, Hayward was diagnosed with meningitis and had her legs amputated. The mother of one is sharing her story through the Meningitis Now 'Adults Get it Too' campaign.

A mother of one who lost both of her legs to meningitis said she initially thought her symptoms were due to a spiked drink.

Hayward said she initially thought someone had spiked her drink, as she only had one that evening before her symptoms set in. (SWNS)

“I had only had one drink at the pub, a vodka and Diet Coke,” Sarah Hayward, now 51, told SWNS of the 2017 incident. “I am an adult so I know what it’s like when you’ve had a few too many, but I had only had one. That’s why I thought that particular drink had been spiked.”

Hayward said she had spent the night watching fireworks near her home in Gillingham, Kent, with friends before hitting the town, and that she suddenly felt cold so she dipped inside the pub.

Hayward landed in the hospital where she was diagnosed with meningitis and had her legs amputated.  (SWNS)

“I remember being in the bathroom and feeling completely out of it,” she told SWNS. “I have very little memory of it; it’s just what friends have told me since.”

Hayward said a friend dropped her at home and that she figured she would feel better in the morning, but after saying goodbye to her daughter, who was headed to college, she blacked out.

Hayward was diagnosed with meningococcal Group W, which is currently experiencing a steep rise in the U.K. According to the Meningitis Research Foundation, the strain carries a 13 percent fatality rate, and the symptoms present differently than other strains of meningitis.

Hayward, who is sharing her story through the Meningitis Now ‘Adults Get it Too’ campaign, said she lost her legs to the infection but hasn’t had any health issues since.

“The disease strikes so quickly — I wouldn’t wish it on anyone,” she told SWNS.