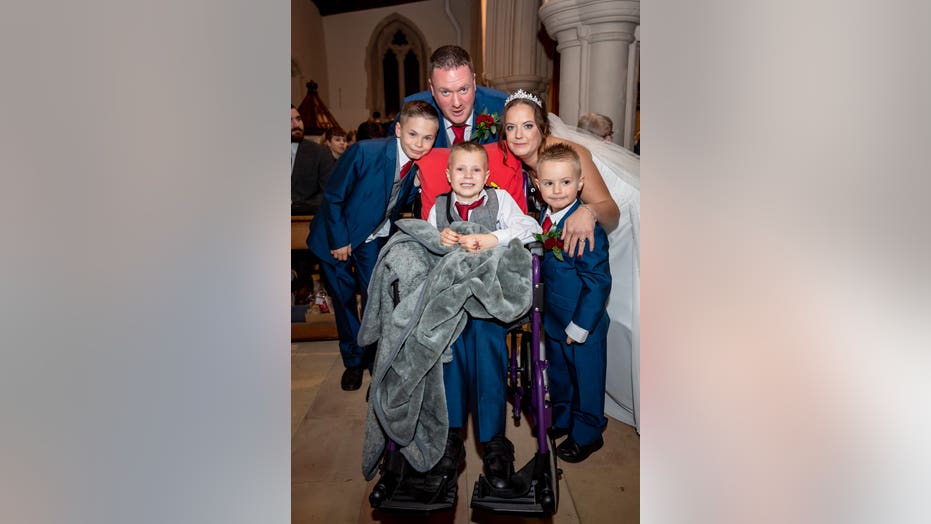 A couple in England who planned to wed next summer moved up their nuptials after learning that the bride’s 8-year-old son has just weeks left to live. Hannah Colishaw, who has three sons, said they were devastated when doctors told the family that 8-year-old Ethan’s brain tumor had returned, and spread to his spine, SWNS reported.

“We were supposed to get married sometime in the summer next year, but after the news last Tuesday, we obviously had to bring it forward,” Henry Matthews, Colishaw’s groom, told the news outlet.

In 2016, Ethan had been repeatedly diagnosed with a virus, but Colishaw pushed for a more thorough exam which revealed a mass in his brain and spine. He underwent surgery and chemotherapy and was declared cancer-free in Jan. 2017, but it returned exactly one year later.

This time, the family was told that treatment wasn’t enough, and that he had just four weeks left to live, according to SWNS.

The pair were due to wed next summer but moved up the ceremony after learning that Ethan's cancer had returned, and was terminal.  (SWNS)

“We sort of knew anyway because he was getting worse but it’s still a shock,” Matthews told SWNS. “He deteriorated so quickly within three months. I think he knows.”

But on Wednesday, Ethan joined his brothers Brandon, 12, and Jack, 4, as they witnessed Colishaw marry Matthews at St. Mary’s Church in Stotfold, SWNS reported.

The couple said their whole community came together to make the special day happen.  (SWNS)

Moving photos from the ceremony show Ethan in his wheelchair alongside his brothers, who were all in matching suits.

“The whole community have come together and we’ve been inundated with offers from everyone,” Colishaw told SWNS. “My work colleague has been incredible and organized so much. Ethan woke me up in the middle of the night saying, ‘You’re getting married tomorrow!’ He’s been so excited. It’s been amazing.”