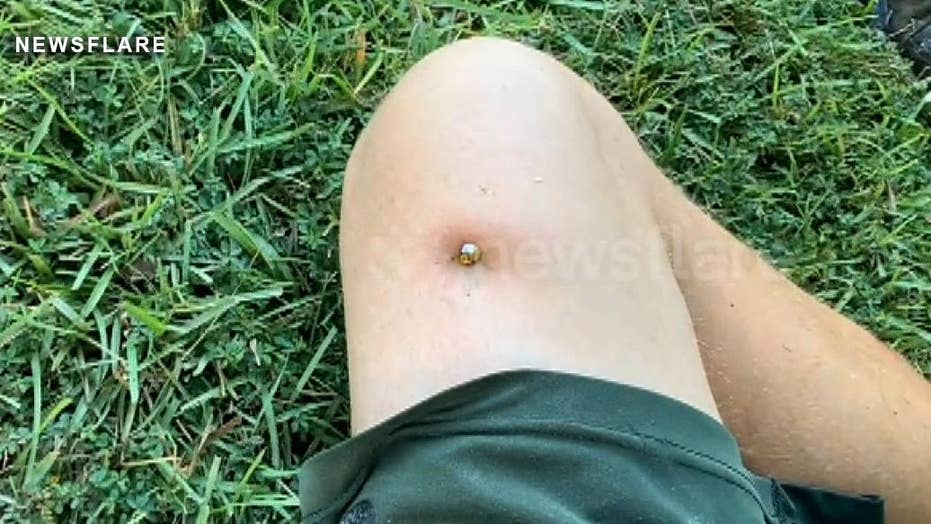 A man in Savannah, Georgia managed to impale his thigh with a 3-inch penny nail while working on a pirate ship he was building for kids.

The harrowing moments after a Georgia constructor worker shot himself in the thigh with a nail gun were caught on video as he first attempted to pull the nail out himself with pliers before paramedics arrive.

Derek Hinkley, who was helping to build a wooden play pirate ship, was using a 3-inch penny nail, which has grooves that make it difficult to extract.

“As I kneeled and grabbed it to make a routine move, it [the nail gun] brushed my leg and fired,” Hinkley told Newsflare of the Sept. 27 accident. “I immediately couldn’t believe what just happened. I think my first words were ‘No! No! No!’”

He said he asked his friend Chris, who witnessed the accident, to hand him the pliers to see if he could wiggle it free. On the video, Hinkley can be seen pulling at the nail with a look of agony on his face, but quickly relenting after it wouldn't budge.

He was released later that same day and told Newsflare that he then returned to help Chris finish the wooden ship.

Nail guns are responsible for an estimated 37,000 emergency room visits each year, with 68 percent of cases involving construction workers and 32 percent involving consumers. Severe accidents have even lead to death, according to the Centers for Disease Control and Prevention (CDC).