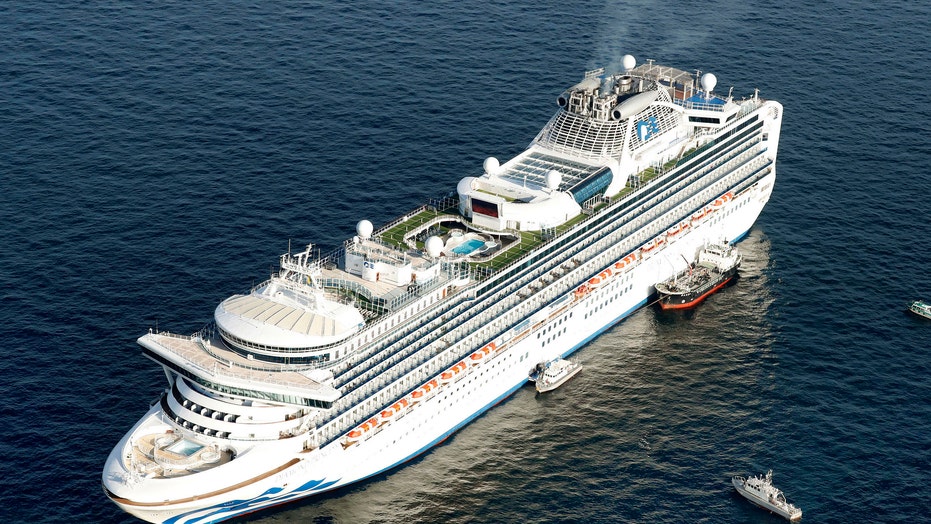 Over 5,000 passengers on two cruise ships in Asia were ordered into quarantine as the worldwide death toll from the coronavirus reached 490 on Wednesday.

At least 10 people aboard a cruise ship anchored off Japan have tested positive for the virus, according to a statement Wednesday night from Princess Cruises. The news comes as infections outside of China continue to increase.

All 2,666 guests and 1,045 crew members aboard the Diamond Princess in Japan have been quarantined for over a day and are likely to remain for "at least 14 days as required by the Ministry of Health," according to the cruise line.

The infected passengers include one from the U.S., two from Australia, three from Japan, three from Hong Kong and one crew member from the Philippines.

Cruise ship Diamond Princess is anchored off the shore of Yokohama, south of Tokyo, Wednesday, Feb. 5, 2020. Japan said Wednesday 10 people on the cruise ship have tested positive for a new virus and were being taken to hospitals.  (Hiroko Harima/Kyodo News via AP)

"Princess Cruises can confirm that the first phase of health screening of all guests and crew onboard Diamond Princess, by the Japanese Ministry of Health, has been completed," the statement said. "These 10 persons, who have been notified, will be taken ashore by Japanese Coast Guard watercraft and transported to local hospitals for care by shoreside Japanese medical professionals."

The confirmed cases -- all over the age of 50 -- were based on the results of 31 out of the 273 tested so far who had cough or fever symptoms, Japan's state broadcaster NHK said, according to the BBC.

Hong Kong announced it was testing roughly 1,800 passengers from a separate cruise ship that came from Wuhan after some people reported having a fever and other symptoms.

About 90 percent of the passengers on the World Dream ship were from Hong Kong, according to the city's health department. Three people from mainland Chinese had reportedly contracted the virus after being on the ship between Jan. 19 and 24, according to Reuters. It was denied entry into Taiwan on Tuesday and it wasn't clear how long passengers would be kept on the ship.

The number of worldwide infections rose to 24,324 on Wednesday — only two have died outside of China so far.

The infections on the Diamond Princess reportedly originated from one passenger who got on the ship in Yokohama on Jan. 20 and disembarked in Hong Kong on Jan. 25, according to the cruise line statement. Princess Cruises said he didn't visit the ship's medical center to report any symptoms or illness.

Officials began screening guests on Monday, with the vessel being placed in quarantine on Tuesday.

HOW HAS CORONAVIRUS AFFECTED CHINA'S AND THE WORLD'S ECONOMY COMPARED TO SARS OUTBREAK?

"Princess Cruises has confirmed the turnaround of Diamond Princess has been delayed for approximately 24 hours to allow Japan public health authorities the opportunity to review the health status of all guests and crew on board," an earlier Princess Cruises statement read.

The Diamond Princess ship is part of the Princess Cruises line, which is owned by British-American Carnival Corporation.

"Guests will continue to be provided complimentary internet and telephone to use in order to stay in contact with their family and loved ones, and the ship’s crew is working to keep all guests comfortable, the Wednesday statement read.