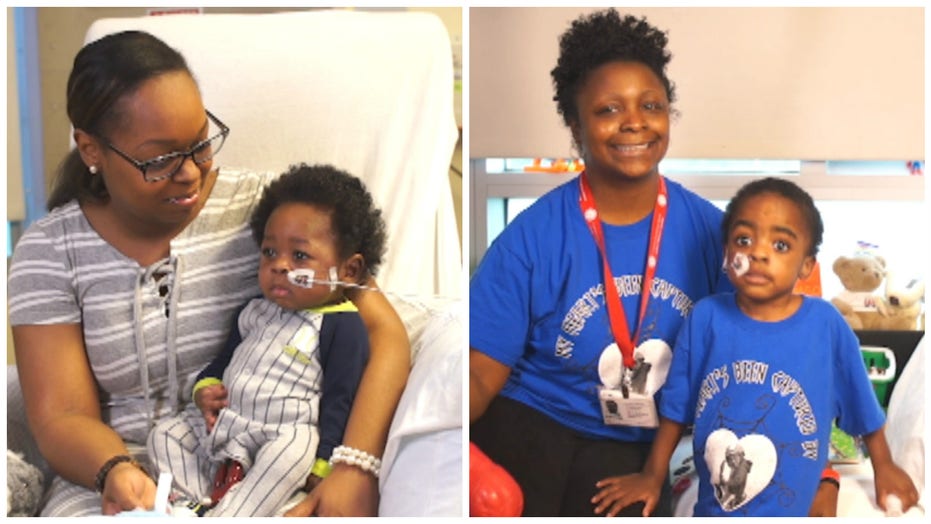 Every 10 minutes, someone is added to the national transplant waiting list in the U.S. During a heart-wrenching hospital journey, two pediatric patients and their moms lean on each other for extra support

After Travis Robinson was born in October 2015 with an enlarged heart, he was added to a nationwide list of about 2,000 other children waiting for a new organ. In the meanwhile, his doctors at Levine Children’s Hospital in Charlotte, North Carolina, put him on a Berlin Heart, a mechanical device that would help his body maintain blood flow and keep his organs working.

"I'll never forget when Dr. Wallis came to us and said, ‘I just want to let you know that your son’s heart is very sick,’” Travis’ mother, Allyson Robinson, of Charlotte, told FoxNews.com. “It took us a little while to accept that a transplant was what he was going to need.”

But Allyson was not alone in her tragedy. Two weeks later, 3-year-old Aydan Ellis was admitted to the same hospital for a serious heart defect. Aydan was put on a Berlin Heart two weeks after Travis.

“Trying to understand what the Berlin Heart was was kind of difficult, but yet I understood that it was something that he needed in order to maintain him until he could get a heart,” Aydan’s mother, Miriam Ellis, of Rock Hill, South Carolina, told FoxNews.com. “The hardest part of this is waiting for the donor.”

Robinson and Ellis meet by chance in a hallway in Levine Hospital and quickly formed a strong bond that few parents ever could.

“We would see each other in the waiting room, in the hallway and we would always check on each other,” Robinson said. “Then it would come to sitting in the room with each other, and then it was, ‘If I’m not here would you check up on baby Travis and if you’re not here I’ll check on Aydan,’ so it kind of evolved into a sisterhood.”

As time went on and weeks turned into months, both families worried over when they'd get "the call" for their child's new heart. While exact wait times are difficult to predict and usually depend on several factors like the urgency for transplantation, the size of the heart and blood type, some national averages estimate the wait time for a heart can be between two to six months. In the United States, someone is added to the national transplant list every 10 minutes and, every day, 22 people die waiting for a transplant.

“Transplant is a good option for some patients. It is not a great option. Our goal is to make transplant a great option,” Dr. Thomas Maxey, a pediatric cardiovascular surgeon at Levine Children's Hospital, told FoxNews.com. “Currently the younger you are the better you do, but the survival [is] about 18 to 20 years. Our goal is to make that 40 years, 50 years, maybe even 80 years of normal life.”

Maxey cared for both Ayden and Travis.

As they waited, the two mothers continued to lean on each other for extra support.

"I had my husband and I had my family, but as a mom it's a completely different set of challenges that you can't really relate to unless you are a mom," Robinson said.

After four months in the hospital, Travis' parents got the call they'd been waiting for— a new heart was ready for their baby.

“The news for us was just amazing, and we’re forever indebted to the family that made that selfless decision," Robinson said.

As fate would have it, Aydan’s mom got the same call just two weeks later.

"Being on the Berlin, it was a temporary fix, but now we're on a home stretch to true healing," Ellis said.

Travis had a successful transplant surgery in May 2016, as did Aydan in June 2016.

“Those are both tough kids, and unfortunately were dealt a bad hand early on, and I think both of those children as well as their families have acquired a unique strength that most of us fortunately have not had to experience,” Maxey said.

While the heart-wrenching waitlist journey of Travis and Aydan was over, their mother's friendship goes beyond the walls of the hospital.

For more information on how to become a donor, visit organdonor.gov.