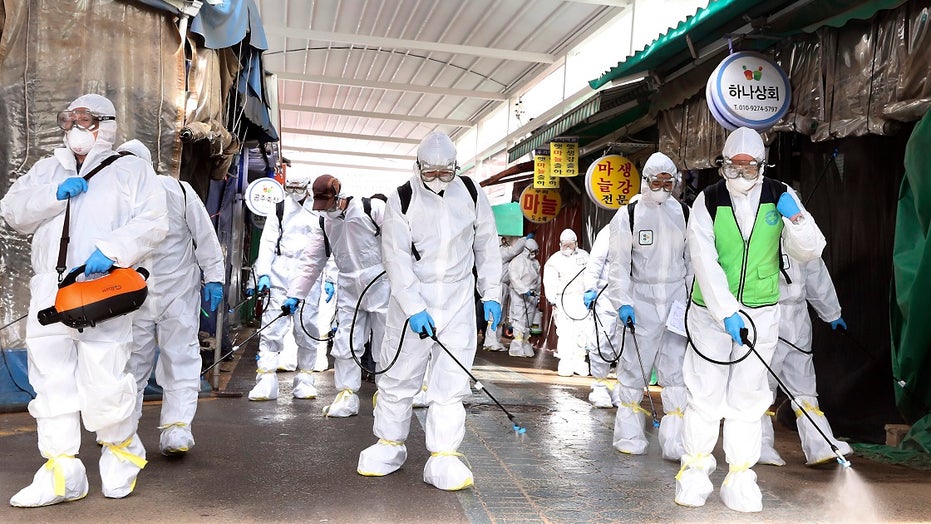 Another American Diamond Princess cruise ship evacuee tested positive for the new coronavirus and was transferred to a health center in Nebraska, increasing the total number monitored at the center to 15, officials said on Tuesday.

The patient was originally quarantined in California at Travis Air Force Base and is the spouse of one of 13 people who arrived in Omaha for treatment on February 17. They will be taken directly to the National Quarantine Unit on the UNMC/Nebraska Medical Center campus.

Workers wearing protective suits spray disinfectant as a precaution against the coronavirus at a market in Bupyeong, South Korea, on Monday. South Korea reported another large jump in new virus cases Monday a day after the president called for "unprecedented, powerful" steps to combat the outbreak that is increasingly confounding attempts to stop the spread. (Lee Jong-chul/Newsis via AP)

The center said earlier on Monday that 12 people were being monitored at the National Quarantine Unit, while two were receiving care in the Nebraska Biocontainment Unit.

Two patients at the center continue to test negative. If they continue to remain healthy and test negative they are eligible to leave quarantine on March 2, which is after the virus's reported 14 day incubation period.

Details for testing and the release of those who tested positive are still being discussed.

Shelly Schwedhelm, the Executive Director of Emergency Preparedness at Nebraska Medicine, told Fox News' Dr. Marc Siegel the patients were all in "stable" condition and are "doing very well."

"We're doing our best to get them whatever they need to be comfortable, and working through all the issues that they have ... with lost luggage and other things," she added.

The National Institutes of Health (NIH) -- an agency of the U.S. health department --  also launched the first clinical trial in the states to evaluate the effectiveness of an experimental treatment for the virus that has infected over 80,000 people globally and caused 2,700 deaths.