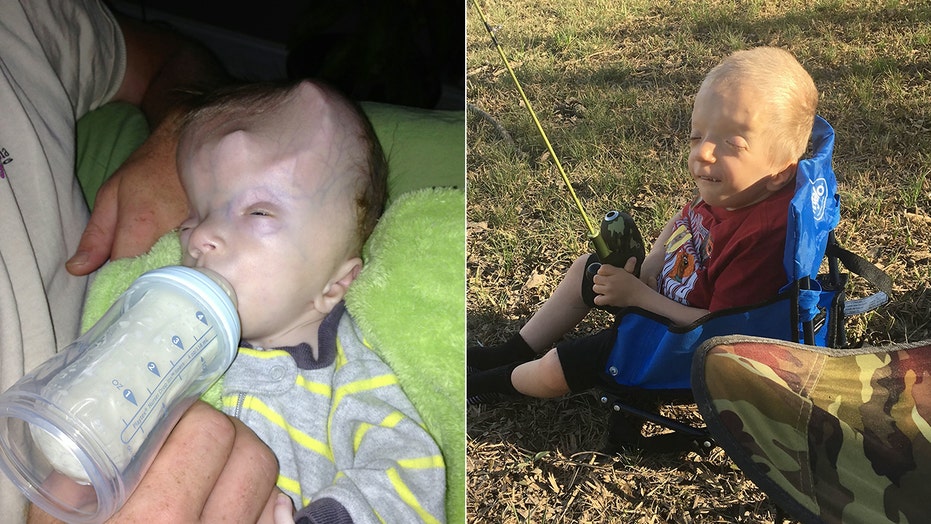 A 6-year-old boy who according to doctors’ estimates wouldn’t make it past his third or fourth birthday continues to defy the odds despite undergoing 36 procedures in his young life. Grayson Smith, who is the youngest of his Alabama family’s four siblings, has even had his diagnoses named after him, as his doctors can’t find anyone else with his same condition.

Doctors have begun referring to his diagnoses as "Graysons Syndrome." (SWNS)

"We have always been hopeful of finding another child like Grayson but we’ve never been able to find anyone like him,” Jenny Smith, the boy’s mother, told SWNS. "He is the only person ever known to have all of these birth defects. There is no one else to compare him to.”

Smith said she and her husband, Kendyl, had no reason to suspect anything was amiss during the pregnancy, but when she gave birth to Grayson in February 2013, he was struggling to breathe and they noticed that his skull was misshapen and his eyes were swollen.

"I was shocked and devastated. I knew straight away that things were not normal,” Smith told SWNS. “Of course, I was still in love with him but we were very scared. His eyes were swollen, he was very small and he had a huge bulge on his head. We have no idea of the cause or why he was born like this. Doctors have done genetic testing, DNA tests but they all came back fine.”

According to the news outlet, little Grayson had bone deformities and a gap in his skull, as well as a hole in his heart and he was blind and deaf. Several of his operations so far, including one that took parts of his ribs to close the gap in his skull, were considered life-threatening.

He's undergone 36 procedures already and is set for another on his spine. (SWNS)

“He didn’t fully fit the criteria for everything he was tested for. No one knew what it was,” Smith told SWNS.

While Grayson, who has been dubbed a “miracle” by his family and doctors, has gained both his vision and hearing, his spine is now curved in a way that is crushing his lungs and stomach. He recently visited the Children's Hospital of St. Louis to determine the best course of treatment to help alleviate his pain.

But day-to-day life for Grayson doesn’t include time for self-pity, according to his parents, who keep his supporters updated on the “Grayson’s Story” Facebook page. In a special Fourth of July post, Grayson recited the Pledge of Allegiance for his followers.

Grayson, with his parents, is the family's youngest of four siblings and they call him their "miracle." (SWNS)

“I cry a lot when I see him in pain and I do wish I could take the pain away from him,” Smith told SWNS. “It has been one big emotional struggle for us and we know so much can happen at any time. Grayson’s condition can change in a matter of hours.”