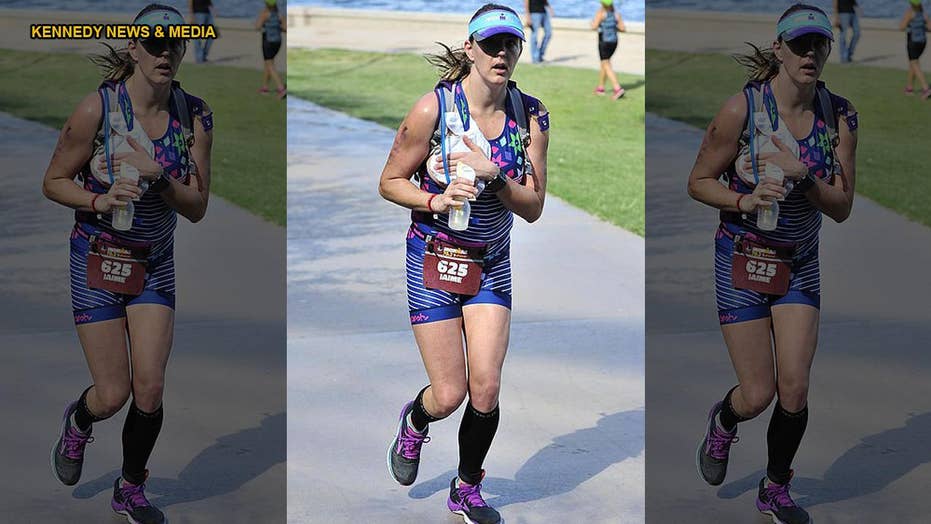 Jaime Sloan, an active duty Air Force Airman, nabbed an Ironman 70.3 personal record, and even found time to pump breast milk during the run portion of the race to feed her 7-month-old son.

A 34-year-old active duty Air Force Airman nabbed an Ironman 70.3 personal record last month — and even found time to pump breast milk during the run portion of the race to feed her 7-month-old son.

Jaime Sloan, who gave birth to her second child in March, had initially planned to use her breastpump during a brief stop, but realized after completing the 56-mile cycling portion that she was pacing to achieve a personal best.

“By the time I got off the bike I knew I needed to pump,” Sloan, who has also completed two 140.6-mile Ironman races, told Kennedy News & Media. “But I was also looking at a personal record because I had had a really awesome bike ride. I just thought, ‘I’m going to do it on my run.’”

Sloan, who worked pumping into her training schedule, said she worried about potential disqualification due to Ironman’s no nudity policy and was using a cloth over her top, but that she received positive reactions from other racers.

“For the most part I don’t know if people even noticed, I did get some looks from women but they were just big smiles,” the Tucson, Ariz. resident told the news outlet. “There were actually two men who ran up to me and asked if I was OK. I think it was because I had a cloth over myself, and at first it might have looked like I was bleeding. But once they looked down and saw my pump they were like ‘Oh, OK!’”

<br> Sloan, pictured with her two children, is married to a fellow active-duty airman and managed to squeeze her training in during early morning hours before the kids got up. (Kennedy News & Media)

Sloan, who is also mom to 2-year-old Henley, completed the Oct. 21 race in 6 hours, 12 minutes and 44 seconds. The accomplishment was even more meaningful because she had struggled with sciatica during her pregnancy.

“About five months in I could barely even walk,” she told Kennedy News & Media. “So right after I had him, I waited by six weeks and then was really excited when I got back running again.”

She said it was important that her daughter Henley see her complete the race, and that her training helped her cope with post-partum anxiety.

“I hope that it can encourage other women and mothers and really anyone who has a lot going on in their lives,” she said. “There’s always a way that you can make it happen, you might have to get a little creative from time to time. No matter what, if someone believes they can do something, they can make it happen because it is possible.”