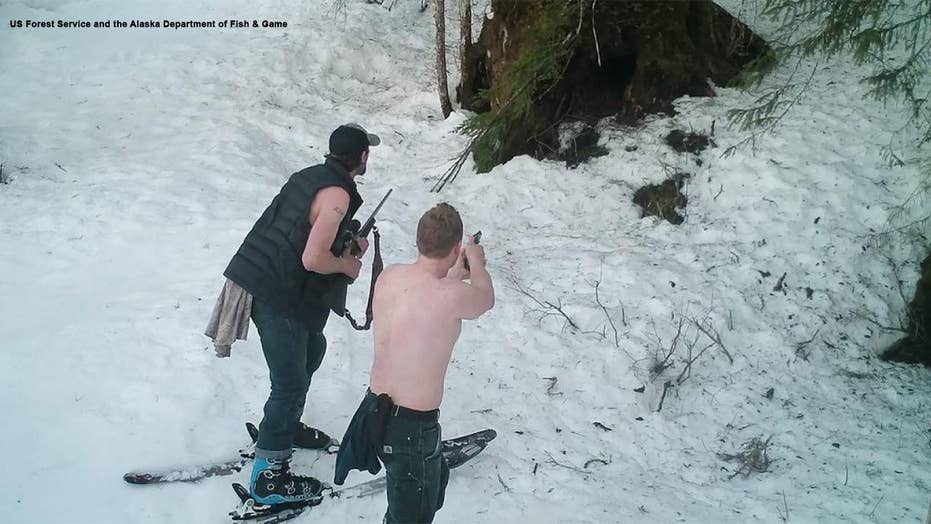 The Humane Society released video footage of a father and son illegally killing a hibernating black bear and her two cubs in Esther Island, Alaska.

Video footage of an Alaskan father and son poaching and killing a hibernating mother bear and her two cubs in their den on Esther Island in Prince William Sound last April has been released to the public through the Humane Society.

Andrew and Owen Renner, who were fined and sentenced to three months in jail, thought they would escape punishment but their actions were being caught on camera, as the mother bear and her cubs were being filmed as part of a study by the Alaska Department of Fish and Game and U.S. Forest Service.

Video footage of an Alaskan father and son poaching and killing a hibernating mother bear and her two cubs last April has been released to the public for the first time. (US Forest Service and the Alaska Department of Fish & Game)

In the disturbing clip, which has since been viewed 140,000 times on Facebook, Owen, 18, and Andrew, 41, can be seen shooting into the den at the base of the tree, killing the mother bear before her shrieking cubs meet their untimely death.

Though the father and son thought they would escape legal punishment for the heist, their actions were coincidentally caught on camera (US Forest Service and the Alaska Department of Fish & Game)

“Would you look at that,” the father said in amazement, after he and his son pulled the adult bear’s body out of the den. The two men then high-five over the bear’s dead body.

CROCODILE CHASES FISHERMEN AWAY FROM THEIR CATCH, SENDS THEM RUNNING FOR THEIR LIVES

WARNING: Video footage contains graphic content of the bears being killed and transported from the scene, as well as graphic language.

“They’ll never be able to link it to us, I don’t think,” Owen agreed, before posing for a photo with their catch.

The footage continues to detail the Renners returning to the scene of the crime two days later, picking up their shell casings and disposing of the dead bear cubs, as per the Humane Society.

“They’ll never be able to link it to us, I don’t think,” Owen agreed, before posing for a photo with their catch. (US Forest Service and the Alaska Department of Fish & Game)

“Although legal in some areas of Alaska, the killing of cubs, or a mother bear with her cubs, is illegal in this part of the state,” the video reads.

Months later, in court, Assistant Attorney General Aaron Peterson said that the scene was the "most egregious bear cub poaching case his office has ever seen."

“What we saw is that there were two bear cubs that were completely defenseless and were shot at point-blank range,” Peterson said.

Andrew was ultimately sentenced to three months in jail, while Owen received 30 days of suspended time for the offense. Each was ordered to pay $1,800 in restitution, with the elder Renner owing an additional $9,000 fine, the Anchorage Daily News reported at the time.

The elder Renner was convicted of eight counts related to the illegal killing and transporting of the bears, and the falsifying of the sealing certificate. His hunting license has been revoked for 10 years, while his son's license has been suspended for two years, as per the Daily News.

Fox News’ Amy Lieu and the Associated Press contributed to this report.