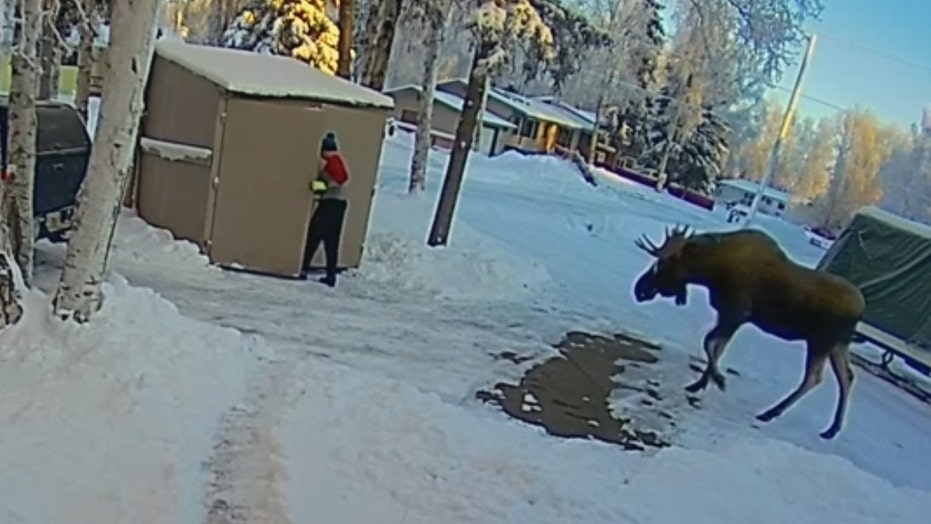 A man from Anchorage, Ala., was momentarily trapped in his shed after a curious bull moose followed him out to the garbage bin, footage shows.

Curtis Phelps had just taken out the trash on the morning of Jan. 11 when he spotted something heading his way out of the corner of his eye. It turned out to be a large bull moose, and Phelps — knowing the animals can be aggressive — quickly shut himself back inside the shed.

According to Curtis’ wife Amy, her husband immediately called her on his mobile phone — but she ignored the call, thinking it was accidental.

Curtis Phelps was taking out the trash when he spotted the bull moose coming straight at him. (Amy Phelps via AP)

“I had no clue that the poor thing was stuck in there,” she said of her husband, the Associated Press reported.

Curtis, not knowing whether it was safe to come out, then tried dialing his 13-year-old daughter, who was asleep in her bedroom. She, too, ignored her phone.

Amy finally picked up on Curtis’ third attempt to phone his family, at which point she realized he was trapped in the shed.

She eventually confirmed that the moose had made its way across the street, allowing Curtis to run back into the house.

The family told AP that they believe this moose may be the same that was birthed in their backyard two years ago and that he’s been returning regularly to check out his old stomping grounds. He once ate a Christmas wreath, they say. This time, however, he only did minor damage to the shed.

The family believes this moose may be the same that was birthed in their backyard two years ago. (Amy Phelps via AP)

The Alaska Department of Fish and Game notes that while moose are generally "less aggressive" than bears, more people are hurt by them each year.

"Fortunately most moose charges are bluffs — warning you to stay back," the department writes online. "But if a moose does charge, don't wait to find out if it's bluffing. Run and get behind something solid, like a tree, or retreat to a safe place, like inside a building or car."