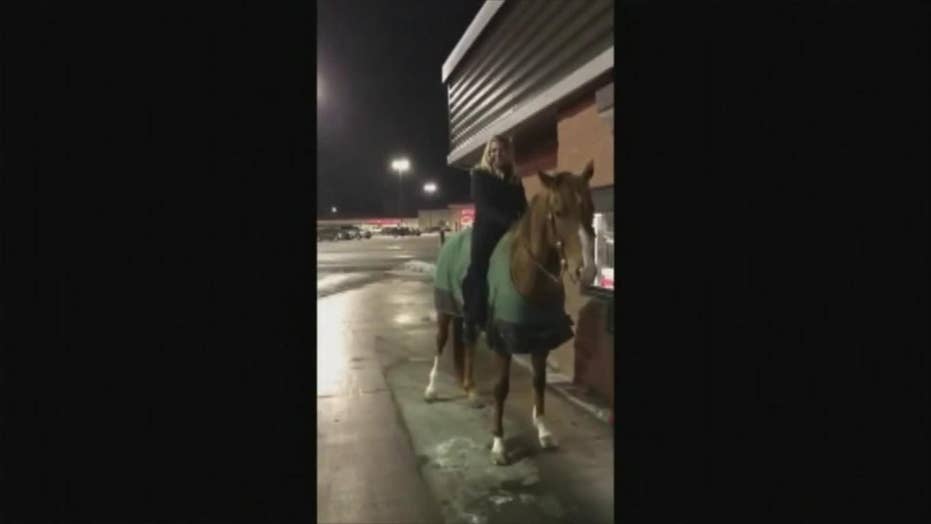 This Wendy’s customer was literally horsing around. One Pennsylvania woman mounted her pony, “Buns,” and trotted through the fast food window’s drive-thru. You have to see it to believe it.

Wendy’s is going to have a field day with this one on social media.

Nurse and avid equestrian Marcella Gruchalak finally rode her horse through the drive-thru lane at a Wendy’s near Pittsburgh last month, a stunt she’s apparently been itching to pull “for years.”

Gruchalak and her friend Shelly had just left a fundraiser in Fox Chapel, Penn., when they decided to stop by Wendy’s to grab a treat for her horse Buns, WNEP reported.

“[This has been] on my bucket list for years, and today I finally get to check that one off because me and Funny Bunny B went through Wendy’s!” Gruchalak said on Facebook the day of the stunt.

In footage taken by Shelly, Gruchalak can be seen guiding Buns up to the drive-thru window, where a slightly nonplussed drive-thru operator takes their order.

“Can we get a small chocolate Frosty for Buns, please?” asks Gruchalak.

To the surprise of an onlooker in another lane, Wendy’s fulfills Gruchalak’s order and hands her a chocolate Frosty.

“You don’t see this every day in the city,” says Gruchalak’s friend.

“You don’t see it any day in the city,” remarks the onlooker.

At one point, Shelly even adds that she “can’t believe” the restaurant charged Gruchalak for the Frosty, considering all the free publicity they were about to give Wendy’s.

Wendy’s was not immediately available for comment, but it's safe to say that Gruchalak — a horseback-shooting competitor and promoter of the Western Thoroughbred Facebook group — probably won’t be taking her horse to McDonald’s anytime soon.

“I thought it would be extra humorous to take him through Wendy's because he’s a redhead just like Wendy,” she wrote on Facebook.

A representative for Wendy’s was not immediately available to comment.