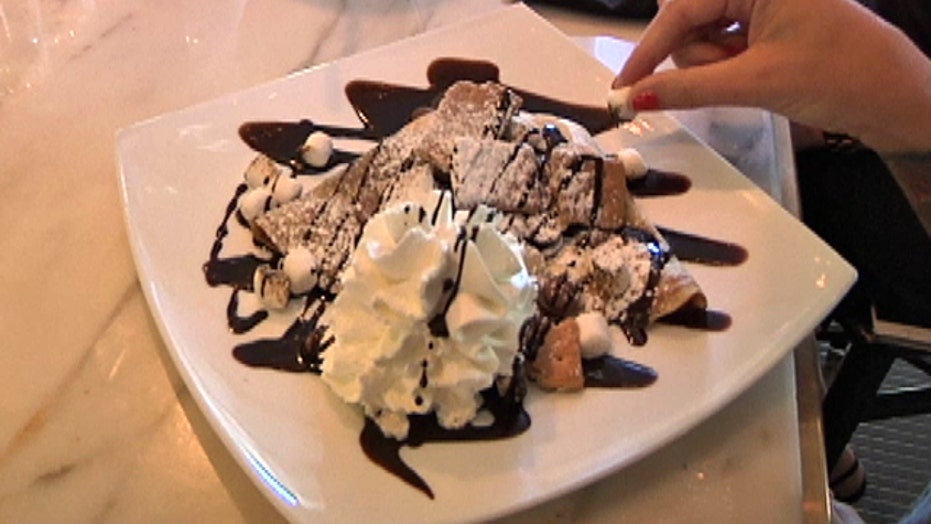 Stores opening left and right in LA, DC, Vegas and even the Middle East

Inside the Sugar Factory there’s candy everywhere --in just about every color and flavor.

Catchy pop tunes pulse through stereo speakers. The store walls and shelves are almost entirely white, but the shop is bursting with color, filled with endless bins of candy and displays.

“It’s not just a normal lollipop you can buy for a dollar,”

If you're looking for designer candy --this is the place.

Sugar Factory owner Charissa Davidovici --who created an empire with her knack for turning sugary treats into haute accessories--opened her flagship store in Las Vegas in 2010. By the end of 2013, there’ll be a total of five stores in Sin City --even one in Bahrain -- and more opening in locations like New York and Los Angeles.

But, the item that’s fueling the Sugar Factory craze is the Couture Pop.

“It’s not just a normal lollipop you can buy for a dollar,” said Davidovici.

The bedazzled lollipops cost up to $30 a piece and come in 10 different flavors. A special plastic case allows you to store it for later without destroying the lining of a purse or pocket. And best of all, the sparkly base, that comes in an assortment of styles, can be re-used and attached to any flavor pop.

Three million of these designer pops have already sold, and countless celebrities -- such as Kim Kardashian, Britney Spears, and Kelly Preston -- have been pictured with them.

“Everyone loves everything bling,” Davidovici said.

The Sugar Factory has even expanded to beyond sweet treats.  In April, it opened American Brasserie, a restaurant with candy-themed cocktails, milkshakes--and, of course, food.

“You can get a steak at a fair price and it’s a good steak,” said Davidovici.

Davidivici was an elementary school teacher who had a dream to open a confectionery shop, because, she says, she loves to put a smile on people’s faces.

“That really is something that’s true to me,” Davidovici said.

And skyrocketing sales of her Couture Pops and other candy is surely making her happy too.

Thousands of customers stop in the Las Vegas stores every day. The five-pound containers of bulk candy that line the walls have to be re-filled with fresh candy on a daily basis.

One secret of the sweet success, she says: Sugar Factory attracts customers of all types and ages.

On any given day a businessman can be found enjoying a beverage at the bar as a family with children strolls through the candy store.

Craig Wolf of Colorado stopped into the Las Vegas store and left with a unique Christmas gift.

“We actually found some cool little pop rocks which we’re going to throw in our daughters stocking stuffer later on this Christmas,”said Wolf. “I haven’t seen those in a long time.”

Karen Story and her son Zac had breakfast in the eatery then got their sugar-fix.

“This is the biggest candy store we’ve ever seen,” Story said as she and her son filled their bag with stringy, blue candy.

It’s hard to find something bitter about the exploding brand.

“We want to be in every home,” Davidovici said.