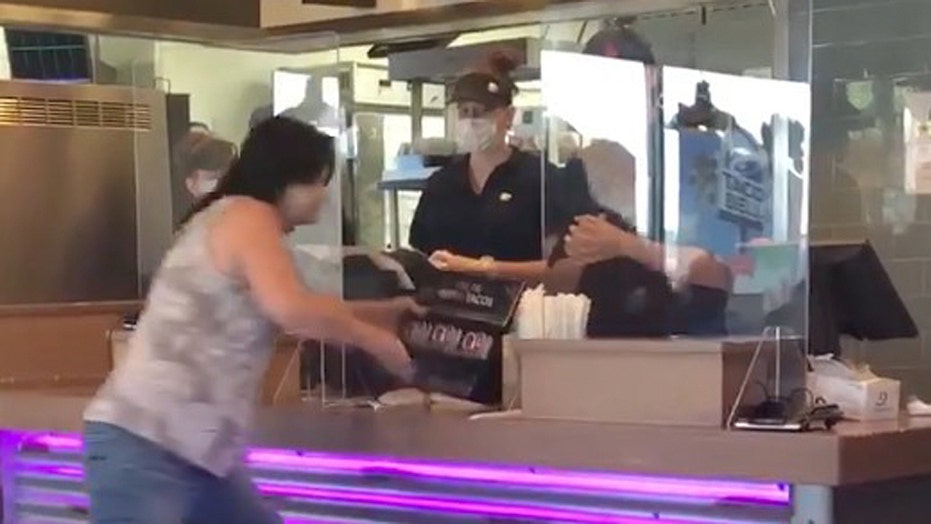 75 percent of Americans eating more comfort food during the pandemic

Apparently, the price of tacos has risen substantially since Charles Manson’s "daughter" has last purchased them.

An enraged Taco Bell customer was recently filmed threatening the staff of a location in Missouri — and referring to herself as “Charlie f---in’ Manson’s daughter” — seemingly after a perceived discrepancy over the cost of her tacos and burritos.

Amid her profane outburst, the woman also called one of the employees the n-word, and attempted to trash the restaurant.

Taco Bell has since commended the staff for defusing the “difficult” situation.

Footage of the woman’s outburst was first shared to Reddit on Tuesday, under the title, “Karen from Missouri Freaksout [sic] saying she was shorted tacos (she wasn’t).”

The woman, incredulous after learning the price of her order, not only threatened employees, but called one of them the n-word and tried trashing the restaurant. (Jam Press)

In the clip, the customer can be seen telling a worker to “give me my g—d---- food, you little p----,” before threatening to “follow you home and f--- you up.” She then begins calling him the n-word and accuses him of not being able to get a “real job.”

After some back and forth with the employee, who called her actions “very inappropriate,” a female employee approaches and hands the woman her receipt, for her to inspect. The employee kindly points out that her order — three Burrito Supremes, two soft tacos — comes to $15.

The angry woman expresses her disbelief at the cost of her order, at which point the employees tell her she can leave, or call corporate.

The employees then appear to tell the woman that she’s no longer welcome in the restaurant, at which point she demands her “f---ing food” and rips a promotional display from the counter, shoves a bucket of straws at the employees, and attempts to shove past a Plexiglas partition.

“Go ahead,” an employee tells her.

“That explains a lot,” the employee shoots back.

“You f---ed with the wrong mother----er! I’m Charlie f---in’ Manson’s daughter!” the woman yells back at the Taco Bell employees. (Jam Press)

The woman then leaves the restaurant, still hurling threats and profanity on her way out the door.

Taco Bell has since commended the staff for their actions.

“Taco Bell does not tolerate any kind of harassment or discriminationm" a spokesperson for the Taco Bell Corporation wrote in an emailed statement shared with Fox News. "The franchisee who operates this location confirmed that no one was injured, and we are proud of the team members present who handled the difficult situation with such patience.”