Robert De Niro, 74, made it clear that President Trump isn't welcome at the restaurant chain he co-owns. (Reuters/Reuters)

Acclaimed actor Robert De Niro has been vocal about his disdain for President Trump in the past — calling him “f---ing fool” during an awards show in January and “an idiot” during a fundraising dinner in March, among other sharp-tongued remarks. So it only makes sense that he’d want the commander in chief nowhere near his Nobu restaurants.

De Niro, who co-owns the Nobu restaurant and resort chain, spoke with the Daily Mail at the opening of Nobu’s new Marabella Resort in Spain last week, where he made his feelings about Trump even more abundantly clear.

“I don't care what he likes. If he walked into a restaurant I was in — I'd walk out,” the 74-year-old actor stated. He further clarified that he would “never let Trump into any of the Nobu restaurants,” according to the Daily Mail.

De Niro’s restaurant partner and Nobu co-founder Chef Nobu Matsuhisa, on the other hand, joked that he’d love to serve both De Niro and Trump at the same time.

“It's my dream for Trump to sit next to Bob. To make them sushi!” said Matsuhisa.

De Niro, seen above with Nobu co-owner Nobu Matsuhisa (left), made the statements during a celebration for the opening of Nobu's newest Spain location last week. (Reuters)

Trump, meanwhile, has patronized Nobu on at least one occasion: He dined at the restaurant’s Moscow location in 2013 “with more than a dozen Russian executives and business tycoons," per a 2017 report from Bloomberg.

The site adds that Trump himself didn’t plan the dinner, but rather that it was “organized by Sberbank Chief Executive Officer Herman Gref, a longtime ally of President Vladimir Putin,” as well as Aras Agalarov, the father of Russian pop singer Emin Agalarov, who is accused of trying to arrange for a meeting between Donald Trump Jr. and a Russian lawyer. 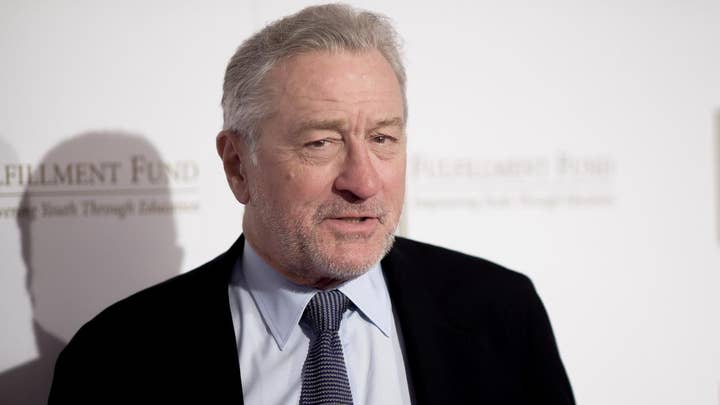 De Niro’s remarks concerning Trump’s persona-non-grata status at Nobu are the latest in a series of the actor’s critical statements concerning the president, which began before he took office.

Perhaps most notably, De Niro starred in a “Get Out the Vote” campaign before the 2016 election, and in outtakes, he said of Trump: “He’s a punk, he’s a dog, he’s a pig, he’s a con, a bull---- artist who doesn’t know what he’s talking about.” He further said he’d like to “punch him in the face” in the same outtake.

De Niro also described Trump as “dangerous” in a Deadline interview shortly before the election, saying, “He’s terrible, and a flat-out, blatant racist and doubling down on that.”

De Niro’s concerns over Trump eating at Nobu might be a moot point, though, as Trump has shown a preference for fast food, pre-packaged foods and burgers with only half the bun, as opposed to Nobu’s Japanese-inspired fare.