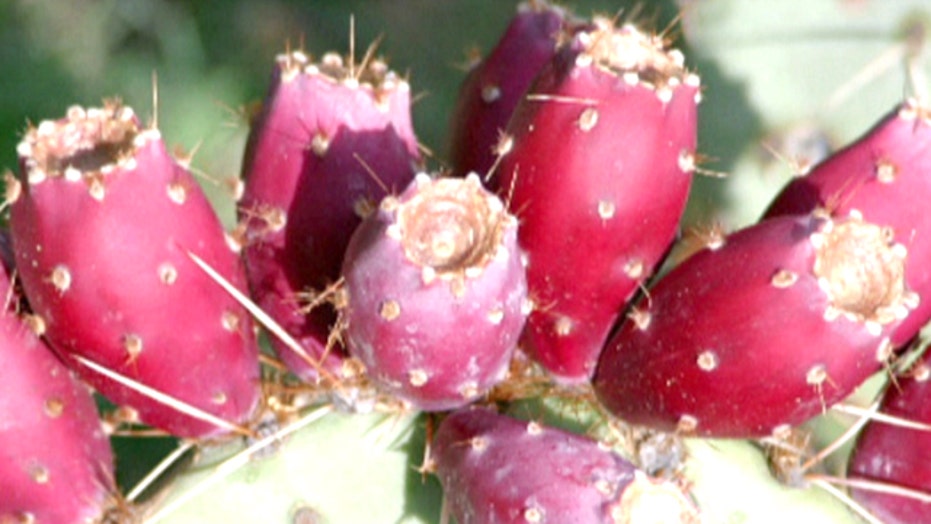 The cure to a stomach-turning hangover may be growing in the Arizona desert. Prickly pears are a cactus fruit, and studies show they help reduce symptoms when taken before drinking. Fox's Aalia Shaheed has the story.

A night of holiday-party drinking doesn't have to be painful the next morning, thanks to a common desert plant.

The fruit of the prickly pear cactus is a lean, mean hangover-fighting machine.

Grown in Mexico and in the Southwestern U.S., researchers believe that prickly pear extract can reduce inflammation in the liver caused by a night of heavy boozing --elevating headaches, nausea and other symptoms.

One study, led by Dr. Jeff Wiese at the Tulane Health Sciences Center in 2004, found that participants who took the extract before a night out drinking said that their nausea, dry mouth and aversion to food were all significantly less severe the next morning.

But Natalie McGee,  the owner of Arizona Cactus Ranch, knew about the prickly pear's healing qualities long before then. Since 1991, she has lived and worked on the ranch harvesting prickly pear to be used in various consumer products, and says the extract has improved her overall health.

"I'm seventy-five, I look fifty, I feel twenty and I act ten. And I have to attribute this to prickly pear," McGee told FoxNews.com

“Studies have proven prickly pear to be very effective in balancing cholesterol, as well as blood sugar,’ said Jones.

But its power to help prevent hangovers is more well known.

"This plant would protect the liver from the toxicity of the alcohol, and you would never get a hangover…but it would never affect your buzz," said McGee.

The extract usually is found in pill or liquid form.

Jones recommends taking the extract at least five hours before you begin drinking to get the best effects.

If you happen to find yourself in an arid Southwestern state where prickly pear grows in abundance, McGee suggests you try an easy-to-make juice.

She recommends peeling the pears, putting them in a juicer, boiling it, and adding a bit of sweetener. Then, just cool it in the fridge.

McGee also makes jams and juices that are available online.

She transports her prickly pears from her ranch to a warehouse in Tucson, where she makes her signature ‘Hangover Terminator’ product.  It is a nectar made of prickly pear juices make at a certain pH level. Once the acidity level is where it needs to be, she heats up the juice, bottles it, cools it and ships it out.

Prickly pear extract may not be able to prevent hangovers from happening altogether, but according to McGee, it to can give you significant relief from those post-holiday party blues.