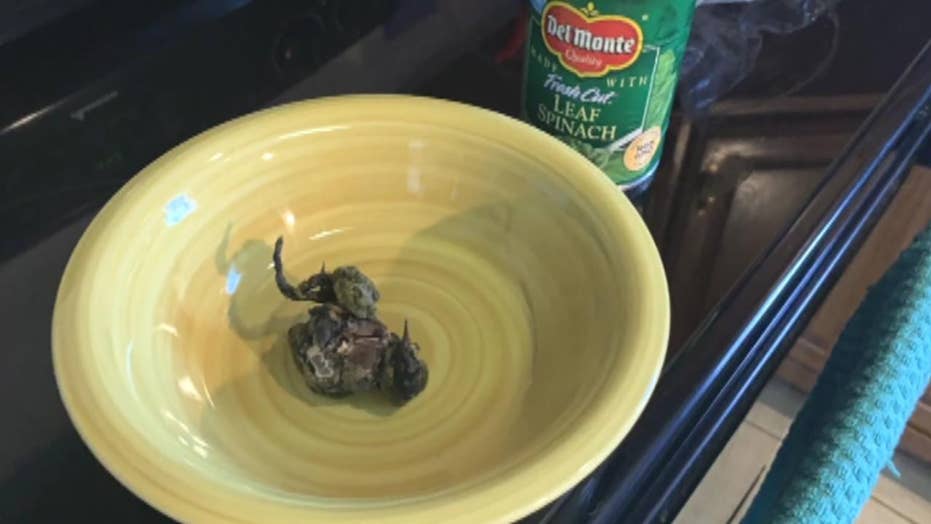 A Pennsylvania woman preparing dinner for her family last week was shocked when she allegedly opened a can of veggies only to find a dead and petrified bird at the bottom of the can.

Cherie Lyons says she was making dinner in her Franklin County home on June 12 when she opened a can of Del Monte Foods spinach.

She dumped the can's contents into a bowl and took a bite before placing it in the microwave like she normally does. But, noticing a lump in the bowl, she went to break it up with her fingers when she discovered the bird, FOX 43 of York, Pa., reported.

“So for dinner tonight i had grilled chicken, baked potato and BABY BIRD...in my spinach!! I am traumatized!!” Lyons wrote in a Facebook post.

“I found some weird stuff in can veggies but never anything like this.. I've washed my hands a couple times and they still don't feel clean and I feel nauseated,” she continued.

Lyons said she called Del Monte Foods to file a complaint but she says it took the company more than five days to get back to her at which time they only offered her a $10 check for her “troubles,” she told FOX 43.

A spokesperson for Del Monte Foods told Fox News in an email that initial contact was made with Lyons on June 13 and a follow up conversation took place five days later. They did not comment on the compensation check.

The company sent an additional letter to Lyons asking her to ship a sample of the bird to them so they can have it “be identified by a third party lab.”

Del Monte Foods wrote in a statement to Fox News on Thursday that it is investigating the matter.

"Del Monte Foods is committed to providing high quality, safe and nutritious foods. We are working with the consumer to gather more information and investigate the matter. We implement strict controls throughout our operations to ensure our products meet the highest levels of quality, safety, and purity."

Lyons said she’s “traumatized” by the incident and is hoping that the company look further into how something like this could happen.