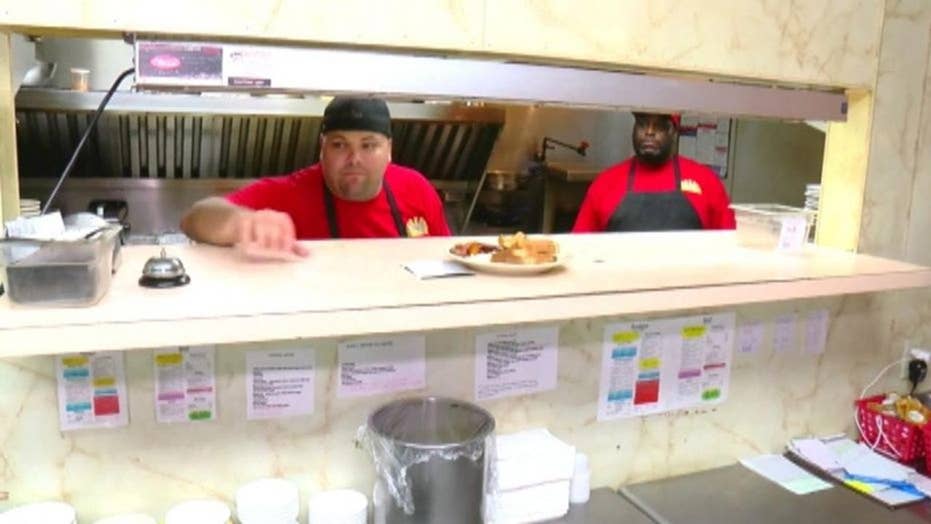 A seemingly harmless discount to parishioners who wanted a good meal after church backfired on a Ohio restaurant after a secular organization cried foul.

The owners of the Starters Cafe in Cheviot, Ohio, offered a 10-percent discount to those who presented that morning's church bulletin at Sunday brunch.

"What we did was make an offer on social media to give a 10-percent discount to anyone that gave a church bulletin to us on Sunday for brunch," Justin Watson said to WKRC.

The Facebook promotion offered a 10-percent discount to anyone who brought in a church bulletin. (WKRC/NNS)

Watson said there are at least seven churches within a mile of the restaurant and felt this would be an easy way to get more people in the door.

"We've had an outstanding response from the local community. There's been a lot of support," Watson said.

Watson, who opened the restaurant the first week of June, said the response was positive – at first.

"Nobody has said a word to me in any way, shape or form. So, as far as you know, thinking that that was any type of discriminatory act or anything offensive to anybody seemed completely absurd to me," Watson said.

Then Watson said he received a negative Yelp review from a woman regarding the promotion, and a letter from the Freedom From Religion Foundation (FFRF) threatening legal action. The FFRF is a member of the Secular Coalition of America and bills itself as a protector of "the constitutional principle of the separation of church and state."

"I realized there may actually be legal repercussions for this. So, in the end, I ultimately (ended up) recanting the offer and also issuing an apology to the lady," Watson said to WKRC.

Watson said the woman accepted his apology and removed the Yelp review. Currently, the restaurant’s Yelp has an average five-star rating.

Watson told WKRC he is not particularly a religious man, but thought it would be a good marketing move.

“My busiest day of the week is Sunday, so, in my line of work, I’m not an incredibly religious person. It was just an attempt to drum up some business for my new business,” Watson said.

Starters Cafe, in Cheviot, Ohio, has since changed the promotion so that anyone who comes in from 12 p.m. to 4 p.m. will be eligible for 10 percent off. (WKRC/NNS)

"We are shocked that there is such little understanding of the Civil Rights Act and that there could be this kind of confusion, naivete that you can reward some customers for their religious beliefs and penalize others," Annie Laurie Gaylor, the co-president of the FFRF, told WKRC.

Though religion – like race, gender, age and nationality – are protected from discrimination, there are some gray areas when it comes to how businesses apply discounts.

“It kind of took me by surprise that something that small is this big of a deal. It’s like telling me I can’t give dad 50 percent off on Father’s Day or offer a local veteran a discount on Sunday when he comes in to eat breakfast. It just seems like these [discounts] are the kind of things that happen all the time in this business on a regular basis,” Watson said.

According to civil rights attorney Megan Fields, one must look to see if the discount is truly discriminatory against others.

"Because these people weren't denied access to the restaurant. They were still permitted to come inside, eat the food and receive service. It's essentially that they didn't receive the 10-percent discount," Fields said to WKRC.

When asked about other common discount offers like ladies’ night or senior citizen discounts, Fields told WKRC, "The courts haven't agreed on how they come out on that. Some say that is discrimination because you're offering an advantage to, women for example, to the exclusion of men. Others are saying this is simply a promotion and that it's not intended to discriminate.”

To ensure no one felt discriminated against, The Starters Café has since changed the offer to be a 10 percent discount given to anyone who comes in Sunday from noon to 4 p.m.

Fox News reached out to the FFRF and Watson for comment but didn't get a reply.