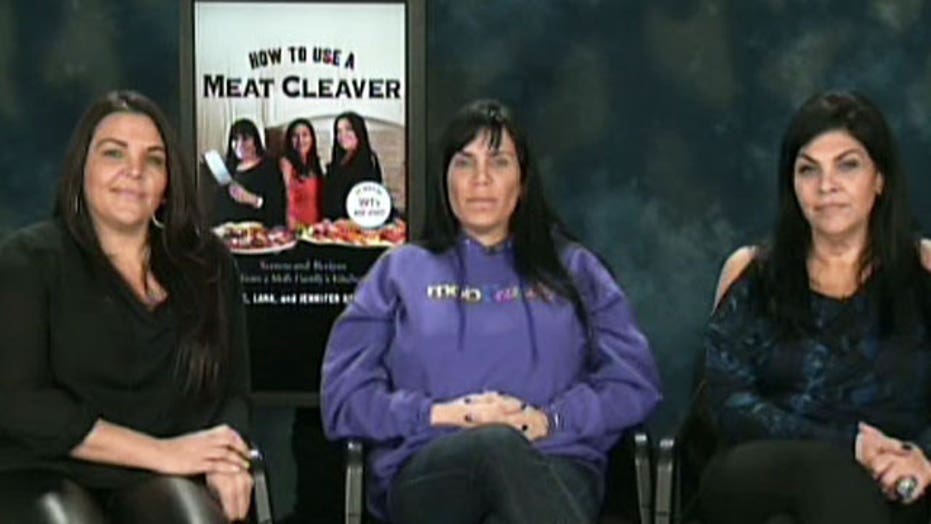 Mob wives demonstrate how to use a meat cleaver

Graziano sisters dish on their new cookbook, ''How to Use a Meat Cleaver'

You'd think as a wife of a wise guy, it might be a good thing to have a few knife skills, and not just for use in the kitchen.

Yet, VH1 "Mob Wives" star Renee Graziano and her sisters, Jennifer and Lana, say how to use a meat clever isn't a lesson in their new cookbook.

The book, aptly titled How to Use a Meat Cleaver: Secrets and Recipes from a Mob Family's Kitchen, is a collection of their favorite and most-coveted family recipes, including Lana’s meatballs, beef stew and string beans oreganata.

“Of the three of us, Lana is the biggest chef and she is the inspiration for the cookbook,” said Jennifer, who is also the creator and executive producer of "Mob Wives." “We [Renee and me] wanted to do a project she could be a part of, work on it together.”

Cooking is a big part of the reality show and drama and disputes are usually played out over a a plate of baked ziti or cabonara.

One of the more popular recipes in the book is Lana’s meatballs.  They're made using ground lean beef, ground veal, ground pork, grated cheese, and herbs.  Lana says her secret for the recipe is soaking stale Italian bread in the sauce, then breaking it up and adding it to the dish to help enhance the flavor.

Lana had the job of organizing her family recipes when they decided to put together a cookbook. “I just gathered them up, put them down on paper, and I try to simplify them for the cooks out there that don’t really know how to do it.”

There are also some helpful tips in the book, such as how to sneak meatballs into a prison by hiding them in a bag of potato chips.  Renee also recalls visiting her father when he was doing time in Minnesota and stashing a box of pot roast for him in nearby woods.

Renee's father, Anthony Graziano who served an 11-year sentence for tax evasion, racketeering, and conspiracy to murder, is the former consigliore of the Bonanno crime family.

Jennifer says there are more food-focused things fans can expect from them, including two more cookbooks to hit store shelves soon, one focusing on seafood dishes and the other on pasta plates. The Grazianos are also in talks to open their own restaurant.

“The three of us are going to open a restaurant together,” said Jennifer. “We are looking for spaces right now to hopefully open this summer … at the Jersey shore.”