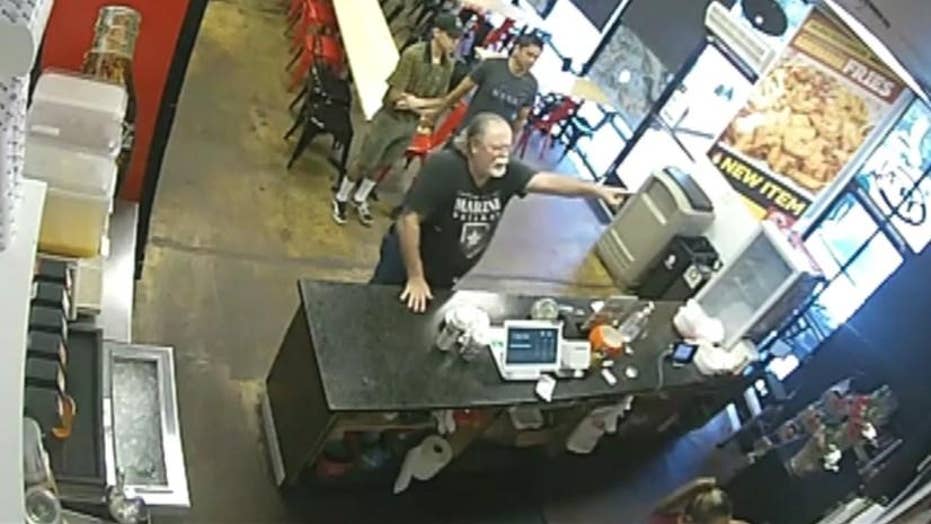 An irate man at a California taco shop was filmed going off on a racist rant at the staff of the Mexican restaurant, reportedly after seeing — of all things — a sign that was written partially Spanish.

An irate man at a taco shop in Anaheim, Calif., was filmed going off on a rant at the staff of the Mexican restaurant, reportedly after seeing a sign that was written partially Spanish.

The man, who was caught on surveillance camera, had entered Palapas Tacos to order the Friday taco special, but was refused the discounted price as it wasn’t Friday.

The would-be customer then went off on the staff, arguing that the outdoor sign advertising the deal was partially in Spanish, and therefore not clear, despite there being a sign inside the shop advertising the same deal in both English and Spanish, according to Fox 8.

“That’s bulls---,” the man hollers at the staff. “[The sign] says it in Mexican. We’re not in Mexico. We’re in America. This is America.”

Owner Juan Del Rio says this is the first time someone complained about his signs since opening years ago. (Google Maps)

An employee is then heard responding to the man, while another points to a sign behind the counter. The man then turns to two people standing behind him in line, and continues his rant.

“So what? It’s in America… Above the border… I’m an American. I don’t use Spanish.”

One of the workers again attempts to draw his attention to a sign and explain that “Viernes” translates to “Friday,” but he still wasn’t having it.

Later, the man is seen getting into his car and driving off, and threatening to call immigration services on owner Juan Del Rio, Fox 8 reported.

“I’m gonna call… immigration, for you, because you’re not legal,” the man says of Del Rio, who was presumably filming.

“It is upsetting that people think like that,” Del Rio told Fox 8. “Just because you’re Mexican, you’re like, illegal?”

Del Rio, who owns multiple restaurants, confirmed to Fox 8 that he is currently in the process of obtaining his citizenship. He also added that this incident marked the first time anyone had ever complained about his signs.