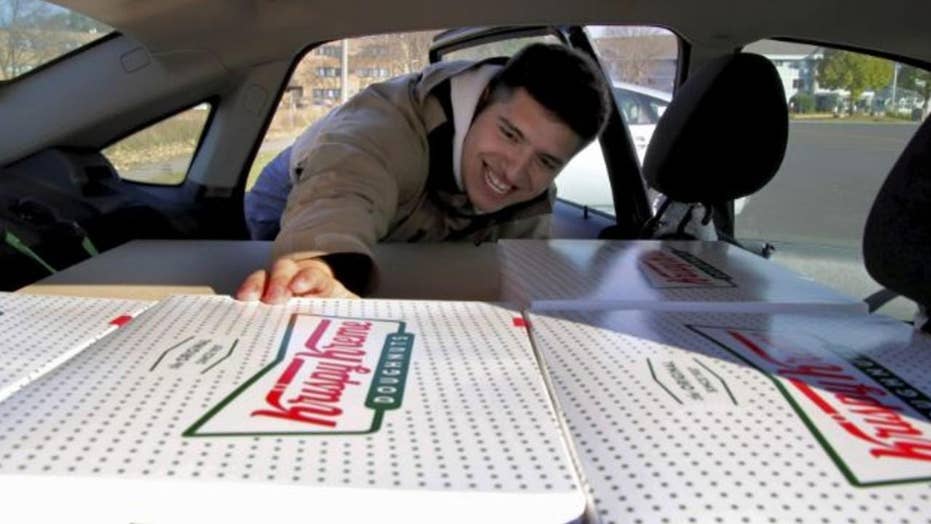 Jayson Gonzalez, 21, seemed to have a lucrative business plan in the works. He drove nearly 300 miles to purchase approximately 100 boxes of Krispy Kreme Doughnuts and re-sold them for $17 to $20. But when the donut shop giant caught wind of his operation, they told him to close up shop.

Looks like Jayson Gonzalez is getting a sweet deal after all.

According to Gonzalez, each weekend he would drive 540 miles, roundtrip, to a Krispy Kreme store in Clive, Iowa, as there are no locations of the doughnut chain in Minnesota – and haven’t been for 11 years – to load his car with up to 100 boxes.

Now, it appears Krispy Kreme has had a change of heart and is instead encouraging the budding entrepreneur to maintain his side hustle. (Deanna Weniger/Pioneer Press via AP)

However, on what would have been his 20th run, Gonzalez was contacted by Krispy Kreme and told to “shut down operations,” claiming it was a liability for the chain.

Now, it appears Krispy Kreme has had a change of heart and is instead encouraging the budding entrepreneur to maintain his side hustle, and even donated 6,000 doughnuts to help fuel Gonzalez’s budding business venture.

Krispy Kreme did not immediately respond to Fox News’ request for comment, but in a statement to Business Insider, the brand said that once it learned Gonzalez was putting the money he made from the doughnut sales toward his goal of graduating from college debt-free, the company wanted to help.

"Our main concern is that the doughnuts Jayson sells maintain our high product quality standards, given the distance and manner in which he is transporting and distributing them. So, we are happy to work with Jayson as an independent operator to ensure consistent delivery of our high-quality doughnuts to our fans in Minnesota," the chain said.

"We wish Jayson great success and we're thrilled to help him achieve it by donating 500 dozen doughnuts when he restarts his business."