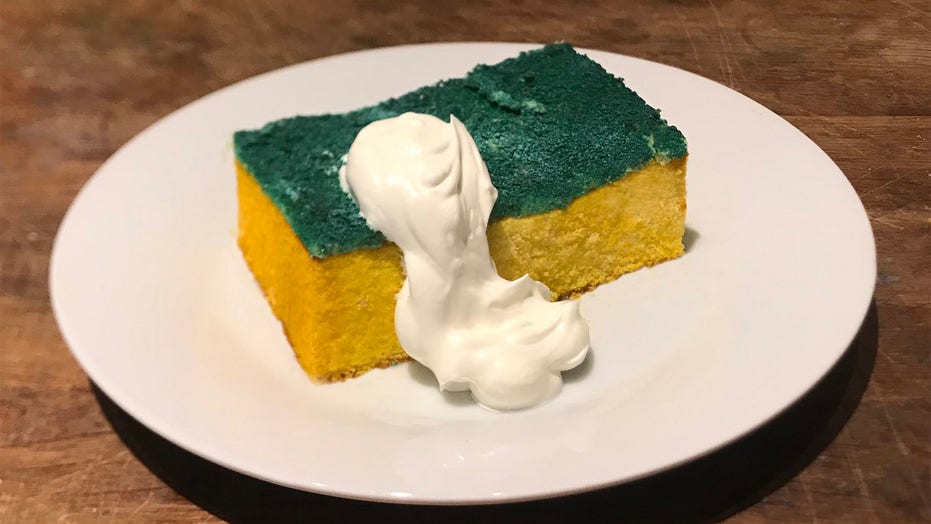 Exact moment of UK couple's wedding cake disaster caught on camera as they were cutting the cake.

No, we insist — you take the first bite.

An animator and amateur baker from Japan has created the world’s most literal interpretation of a sponge cake — and yep, we’re probably done with sponge cake for a while.

SEE IT: BRIDE AND GROOM REQUEST WEDDING CAKE IN THE SHAPE OF A LIFE-SIZED DEER

Professional animator Takahiro Shibata, who tells Fox News he only bakes “as a hobby,” created his realistic-looking “sponge” cake after challenging himself to one-up the confections in his neighborhood.

“I saw original Christmas cakes in the town last year,” Shibata told Fox News, adding that he was inspired by the elaborate designs. “I thought, ‘I would like to try it,’” he said.

The result was “more like a sponge than I ever imagined,” he said on Twitter, according to a translation from Japan Today.

Commenters seemed to agree, with reactions ranging from awe to grossed out.

“The cream has started to look like a cleanser or some sort of detergent,” one Twitter user wrote.

“My brain doesn't recognize it as food even if I enlarge the image to full size,” another said.

Shibata, a graduate of the Tokyo University of the Arts, also experimented with an “inverted color” cake, made of blue jelly and black frosting. The idea, he said, was to make a cake that would appear more traditional — strawberry-topped, with cream — in a photo negative.

We can only wait to see what other appetizing (?) ideas Shibata has in store for us in 2020.