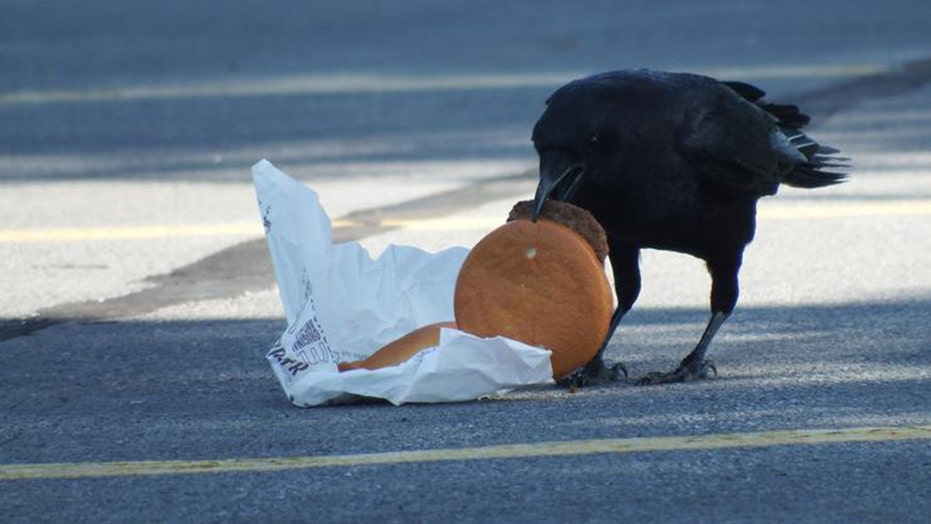 Fast food may be the reason dumpster-diving urban crows have higher cholesterol levels than their rural cousins.

That’s the conclusion of a study published Tuesday in the journal “The Condor.”

A research team at Hamilton College in New York examined 140 California crows and found that the more urban the bird, the higher its cholesterol.

A crow feasts on a discarded hamburger. (Andrea Townsend)

Next, the team fed McDonald’s cheeseburgers to crows in upstate New York and found their cholesterol was higher than winged counterparts close by that had to fend for themselves.

But the study says it’s not clear if cholesterol was doing the crows any harm.

Survival rates were lower for urban crows than rural ones, but cholesterol wasn’t the culprit, the study says.

“Despite all the bad press that it gets, cholesterol has benefits and serves a lot of essential functions,” says Andrea Townsend, who headed the research team. “It’s an important part of our cell membranes and a component of some crucial hormones."

She added, "We know that excessive cholesterol causes disease in humans, but we don’t know what level would be ‘excessive’ in a wild bird.”

Jokka Jokimaki of the University of Lapland in Finland was surprised that fast food might not be harming crows, according to New Scientist.

“There are probably some other urban-related factors that are more important for the crows,” like disease and car collisions, he said.