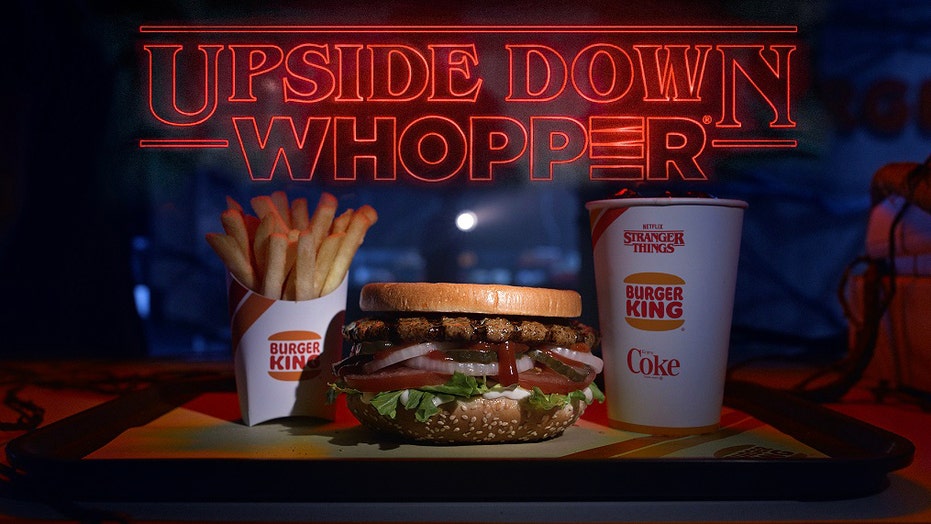 Fans of “Stranger Things” can show their appreciation for the show by eating their burgers upside down.

The Upside Down Whopper is literally what it sounds like: a Whopper served upside down. The “new” item is a reference to “the upside down” — an alternate reality dismension from the Netflix series “Stranger Things,” which usually houses various monsters.

The “Stranger Things”-inspired sandwich is only being offered in select locations. (Burger King)

Fans who don’t live in these cities will presumably have to turn their Whoppers upside down themselves.

“The King of flame-grilling is turning upside down," wrote Burger King in a press release. "The Upside Down Whopper sandwich features exclusive packaging and the same ingredients as the original Whopper, served upside down."

Participating restaurants will also have limited-edition T-shirts and pins – as well as Burger King crowns and ketchup packets – per the release.

Participating restaurants will also have limited-edition t-shirts and pins — as well as Burger King crowns and ketchup packets. (Burger King)

Burger King's 'Stranger Things" celebrations don't end there: In addition to its upside-down Whopper, guests will also be able to purchase a "Hopper" meal – named after a "Stranger Things" character –  via DoorDash for only $5, by using the code "STRANGER" while ordering. Those who do so will also be treated to "exclusive" content from the show.

The restaurant is also giving away a "Stranger Things" VIP experience via an instant-win game.

The upside-down burger will be available at select locations starting June 21st. The third season of “Stranger Things” premieres July 4th on Netflix.