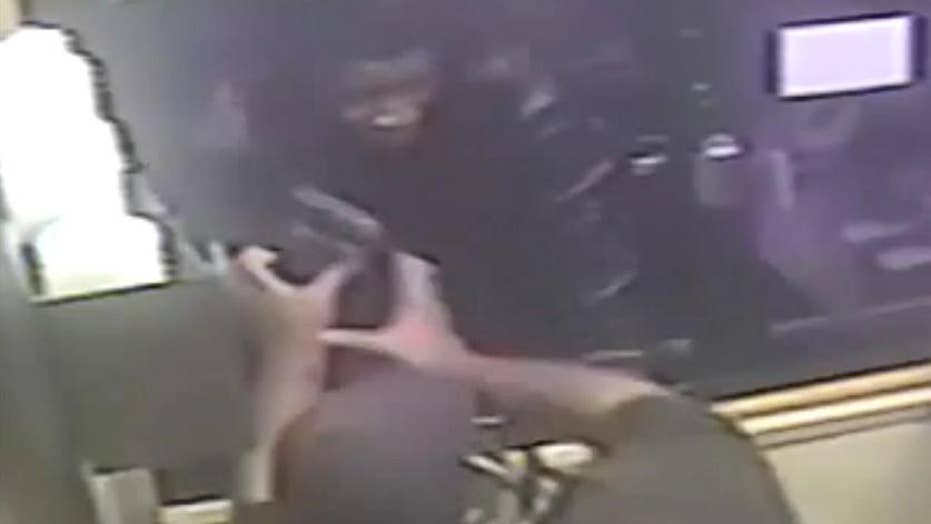 A Houston, Texas, Burger King employee showed off his quick thinking when an armed robber tried to crawl into the fast food chain via the drive-thru window.

A Houston, Texas, Burger King employee showed off his quick thinking when an armed robber tried to crawl into the fast-food chain via the drive-thru window.

Matthew Linscomb was working a closing shift when the altercation occurred on August 11.

Linscomb told ABC13 the man was going to be his last drive-thru customer of the night.

"I got a customer in. Take the order like any other normal thing," Linscomb said.

However, when the man came up to the drive-thru window, he confronted Linscomb with a gun.

"As soon as I opened the window, I look at the guy and he points the gun right at my face," he recalled to ABC13. "He said, 'Get back, step back.'"

In security footage released by the Houston Police Department, Linscomb is seen immediately reacting as the man tries to crawl through the window with his gun pointed toward Linscomb.

Instead of running away, Linscomb runs toward the man with a gun, who appears to get stuck while crawling inside, and pushes him out before quickly shutting the drive-thru window.

Of his fast reflexes, Linscomb’s mom credits them to martial arts.

“He used to take karate lessons,” his mom said to ABC13.

Houston police are still looking for the armed robbery suspect – described as a black man, 20-25 years old, between 5-foot-9 and 5-foot-11. Anyone with information is asked to call Crime Stoppers at 713-222-TIPS (8477) or submit tips at crime-stoppers.org.