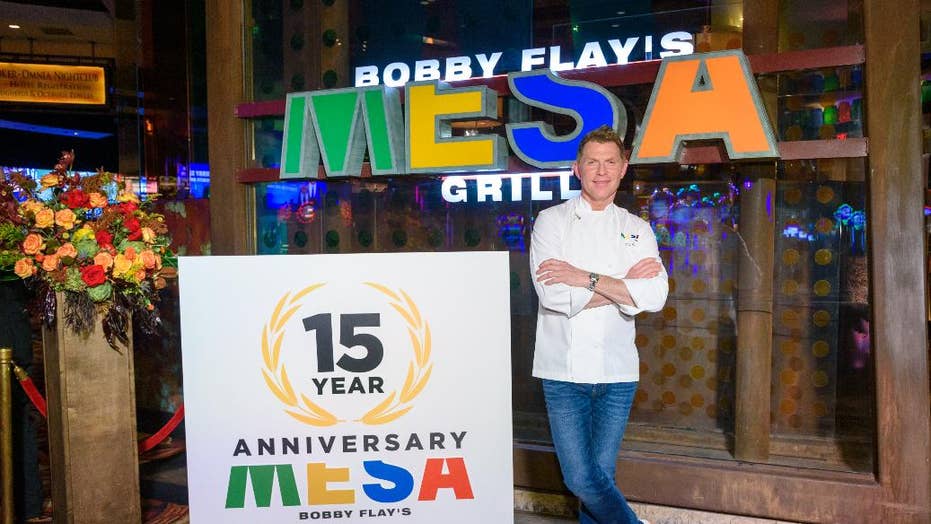 “The 15 years have gone very fast here at Caesar's Palace. But I have to say, it's been so satisfying,” Flay told Fox News. “We want to make your taste buds dance — but I think that that's what Vegas is all about. It's kind of pushing the envelope, and it really is one of the first places to do that.”

Flay said the beauty of the restaurant industry is that it's “a living, breathing thing” that relies on "lots of lots of team members to come to work every day, be passionate and inspired to do their job in the best way.” And his staff certainly is passionate: The establishment also boasts 10 staff members who have been with the restaurant since Day 1. Mesa Grill has also catered to nearly 2.5 million customers in the last 15 years, as well as their ever-changing palates and preferences.

On that topic, the grill master also weighed in on the rise in popularity of meatless burgers and plant-based eating, with brands such as Beyond Meat and Impossible Foods leading the way.

“I think plant-based dishes in general, whether it's, you know, the Impossible Burger or whatever you want to call it — I just think that people are eating more vegetables. So great. … I'm all for that,” Flay said. "You'll see on our menus that there are a lot more vegetarian dishes [and] plant-based dishes because that's the [trend] people are sort of gravitating towards.”

He's not wrong. The trend toward plant-based meat has been growing in popularity, with the plant-based food industry growing 11 percent between 2018 and 2019 in the U.S., according to Yahoo. More than half of the top 100 U.S. restaurant chains have at least one plant-based entrée and the word “vegan” can be found on 11 percent of U.S. chain restaurant menus, according to Forbes, citing a 2018 report from the Good Food Institute.

But while Flay understands the craze, he'd rather “make a veggie burger made up with other ingredients.”

“Personally, it's not my thing," Flay said. "But I get it,” he added, before explaining that he’s “a burger purist, so at this point, I'm going to stick to beef.”

And with Thanksgiving just around the corner, the celebrity chef confirmed he's a purist when it comes to the turkey, too.

“My turkey is so simple,” Flay said. “I put a lot of salt and pepper on the turkey. I put some chicken stock in the bottom of the thing and I throw it into the oven and close the door. A few hours later, it's done.”

But the chef’s favorite Thanksgiving dish? It's not the bird.

For more, watch Flay's entire segment with Fox News in the video above.