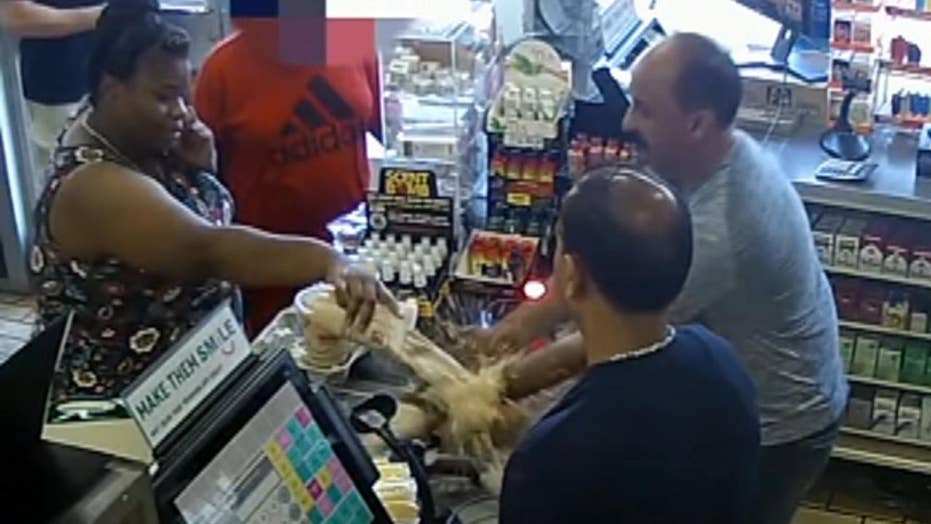 Raw video: Suffolk County Police asking for help to identify woman who poured beverage on 7-Eleven store counter because she was allegedly upset with the price.

New York police are reportedly searching for a woman who dramatically threw iced coffee across the counter of a 7-Eleven after a reported squabble over the price of the drink.

On Aug. 30, the unnamed woman became irate after she learned the price for the three iced coffees she intended to purchase at the 7-Eleven in Mastic, Long Island, WNBC reported.

In video footage obtained by Fox News, the customer chatted on the phone as she tried to buy the drinks at the register before the transaction quickly turned sour. Getting in an argument with the 7-Eleven staffer working the cashier, the customer dumped the drink after learning how much it all cost, according to police.

Storming out of the convenience store, the disgruntled woman proceeded to escape in a GMC Yukon with New Jersey plates, the outlet reported.

The dramatic incident caused damage to $200 worth of cigarettes, investigators said.

Now, the Suffolk County Crime Stoppers is offering a $5,000 cash reward as they urge witnesses to contact them with any tips on the crime.

Representatives for 7-Eleven did not immediately return Fox News' request for comment regarding prices for iced coffee at the Mastic location.