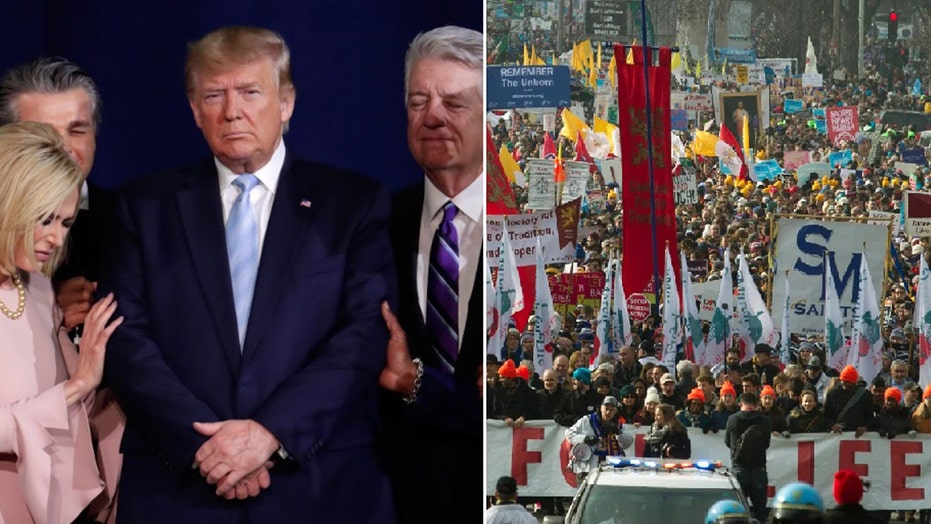 First-timers, especially evangelicals, are expected to be a big part of Friday's March for Life as President Trump made history as the first sitting president to join the anti-abortion rally.

The march has seen massive growth in evangelical attendance since it was first organized the year after the Roe v. Wade ruling in 1973, said Jeanne Mancini, the president of the March for Life, which began largely as a Catholic event.

"Increasing evangelical participation at the March for Life is, and has been, an organizational goal and broader win for the movement," Mancini said.

"Inviting wonderful Evangelical leaders like ... Pastor David Platt from McLean Bible Church, Rev. Dr. Matthew Harrison of the Lutheran Church Missouri Synod and Jim Daly, President of Focus on the Family, to participate is one small way we do this. We want to do everything possible to welcome pro-life people of all faiths to the March for Life.” 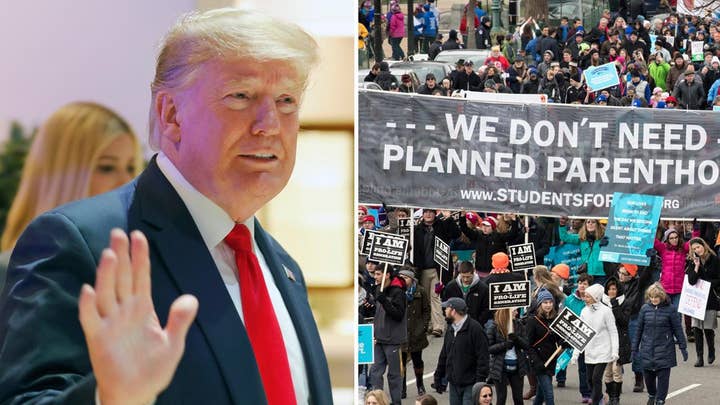 Evangelist Franklin Graham shared on Facebook Wednesday morning: “I’m going to do something on Friday that I’ve never done before — I’m going to march,” the son of Billy Graham wrote. “I’m going to DC to walk in the March for Life.”

Graham, who is the president of the Billy Graham Evangelistic Association and Samaritan's Purse, as well as his daughter, Cissie Graham Lynch, said they are attending the event in an effort to emphasize the importance of the issue to "the courts, Congress, the media, and the world."

"Every life matters to God and should matter to us," they wrote.

Jack Graham, the pastor of Prestonwood Baptist Church (unrelated to Franklin Graham), will be joined at the march by 100 members of the Plano, Texas, church where they have operated a pregnancy center for 30 years.

Evangelical faith leaders, including Pastor Jack Graham, pray for President Trump at a "Evangelicals for Trump" coalition event for his re-election campaign. Trump will be the first sitting president to address the March for Life when he take the stage Friday at the annual anti-abortion gathering. (AP Photo/Lynne Sladky/Jose Luis Magana)

"This is my first time," Graham told Fox News. “We’re at a tipping point on the issue of the sanctity of life in the country and the very fact that the president is speaking live for the first time just indicates the massive movement of life for evangelicals in the country."

Penny Nance, CEO of Concerned Women for America (CWA), who attended for the first time in the 90s, lauds Mancini for "a fantastic job of enlarging the coalition" and "making sure everyone feels welcome, Catholic, evangelical."

She said that while she's seen a surge of support with the Trump administration, the trend for attendance has been the same: "It’s a very young crowd. It's families. It's mostly women and young people. It is a peaceful, prayerful, joyful crowd..."

Leading this year's march are 200 students from Colorado Christian University (CCU), a non-denominational school, that has partnered with the March for Life for the past four years.

ABBY JOHNSON: MARCH FOR LIFE 2020 -- HERE'S WHY THE CONVERSATION ON ABORTION NEEDS TO RADICALLY SHIFT

Janaya Fulk, a freshman at CCU, said she is motivated to march by her faith and her pursuit of a nursing degree.

"I have been in a situation where I've watched births happen and this is what spurred me to sign up for this opportunity, because life deserves to be protected," Fulk said. "That's why I'm here to help with that." 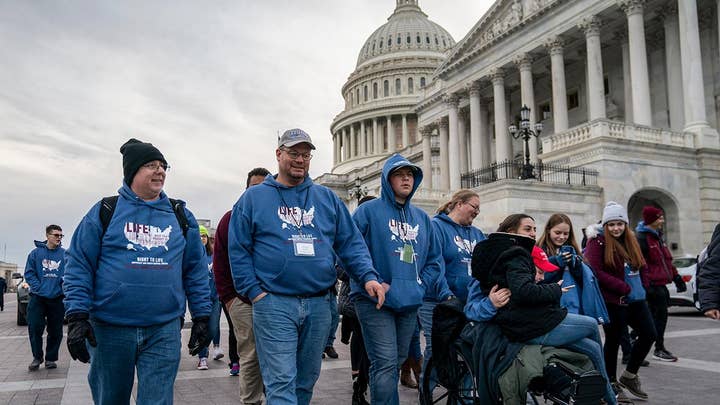 Jordan Jantzen, 21, a member of the CCU for Life Club, said it's a "distinct honor" to be leading the march, especially with Trump joining this year.

"As soon as I found out about it...I purchased my ticket right away," Jantzen told Fox News. "I just continue to get blown away by seeing so many people my age. It shows that we are the pro-life generation and we believe the sanctity of human life is of utmost importance from conception until natural death."

MARCH FOR LIFE WON'T BE HEAVILY COVERED BECAUSE MEDIA IS 'AFRAID OF THE TRUTH,' SAYS SENATE CANDIDATE

Samantha Oldfather, 20, a junior majoring in psychology and minoring in business, said she wasn't sure last year if she was pro-life or pro-choice when she attended the march for the first time but after researching, she is certain life starts at the moment of conception.

She has seen the movement grow at her university, which had 27 students at the march last year.

"I do believe there is a great amount of energy that is backing the pro-life movement this year," she said, adding that she believes 2020 is jump-starting a "pro-life decade" that is unifying all kinds of people across the country.

"Coming from a Christian university, there are all different denominations," Oldfather said, "but we're all coming together for the same cause."