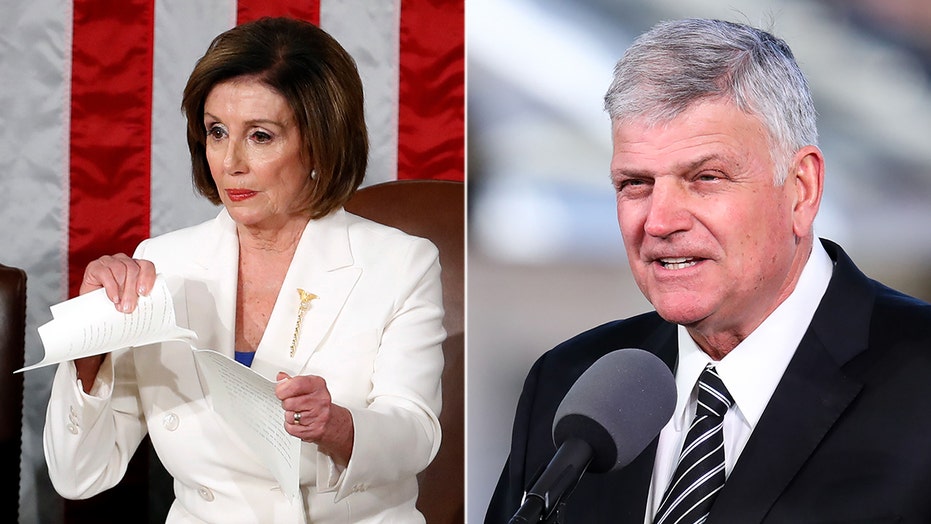 Pence reacts to Pelosi's 'new low' at the State of the Union, upcoming final impeachment vote

Though Graham and other faith leaders applauded Trump's remarks, he said in a Facebook post Wednesday that Pelosi and her Democratic colleagues' disdain "felt like a very personal resentment and hatred for the successes of America."

CHRISTIAN LEADERS REACT TO TRUMP'S EMPHASIS ON FAITH DURING SOTU

"How could leaders in Congress be so indignant about good news for the people of this country?" the son of the late Billy Graham writes, in reference to many Democrats' refusal to applaud or stand for Trump and his honored guests.

"Why would they not celebrate people seeing increases in their wages, our military being strengthened, a young girl receiving a scholarship, victories in the fight against ISIS, a military hero reunited with his family, a 100-year-old three-war veteran being honored, and other great news?" Graham said.

The president and CEO of Samaritan's Purse concludes they have "contempt for the heart of America."

Graham's comments came after Vice President Mike Pence, who was seated next to Pelosi during Trump's speech, told "Fox & Friends" that tearing up the speech was "a new low."